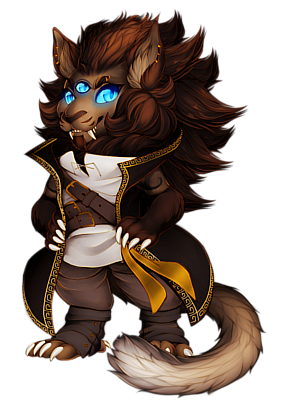 Pirate AU of this guy.
Azu is a ruthless pirate lord, both feared and revered by every man or woman to ever sail the seas. He is captain of the Aurum Leonis. This lion is cold hearted beyond compare and not at all above acting sweet for the sake of getting what he wants from people. Azu demands respect above all else, and most of his crew aren't even allowed to call him by his name. They refer to him as captain if they don't fancy a good lashing.

Azu favors gold above all else in life. If he could eat gold, he wouldn't even care about food anymore. He holds a high favoritism in aztec gold, adoring the intricacies of such artifacts.

He is the mortal enemy of Captain Lian. Lian despises him for 'corrupting' his older brother, Tchono, who happens to be Azu's first mate. In reality, Tchono simply owes Azu a life debt.