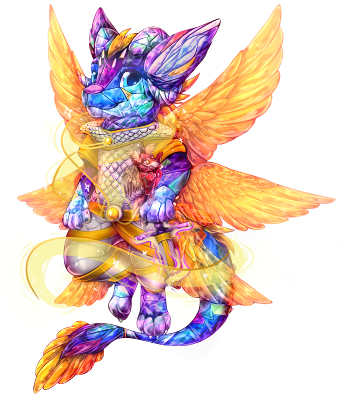 Mosaic is infected with Lycanthropy. Changes into a beastly monster after exposure to moonlight or especially frustrating board games. Howling at the moon relieves the symptoms for a little while, but use a Golden Apple for best results.

Current Paintie by CarrotCube I cannot stress enough what a pleasure it was working with them and would recommend them a thousand times over!

Proud to have contributed the original Battle Buddies for all you warriors out there who dont want to go into battle alone! Here is the detailed run down of what my friends can do for you! Take good care of them and they can mean the difference between victory and defeat!

Shocking Aura - Both players take 250 Lightning damage/turn; scales with your intelligence.
Both players are permanently electrified.

Passively increases damage dealt by 10%, and reduces damage taken by 10% (this doesn't stack with other 10% buffs).
Has a 20% chance to reduce all damage taken by 80% for the round; this is only useful if you go first. (Hidden)
Has a 27% chance to heal the user for 400 (does not scale), and cleanse effects on them. (Hidden)