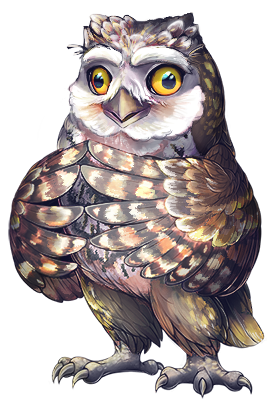 Athos is infected with Zombipathy. Eating brains relieves symptoms for a time, but comes with memories of the brain's former life. Your doctor recommends adding hot sauce for extra flavor, but a Golden Apple a day will send the Zombipathy away.

Athos is a well known sage among the villagers, and known to have several quirks:

He flails when getting an exciting thought

Names inanimate objects such as phones, cars, computers, and his favorite mug.

He also has a nervous tick that makes him shrug his shoulders 4-5 times in a row quickly when anxious.

Frequently misspells words, he blames it on his clumsy feathers and crossed eyes.

On the surface, he's just a weird friendly old bird with strange habits. However, he is strangely secretive about his experiences and instead casually rambles on about the the end of times.