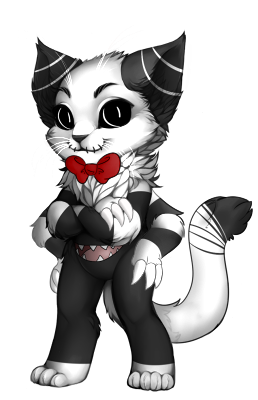 Davick has fallen ill with Blood Obsession. Time taken to craft an item is increased by 50%. This illness can be cured with Plasma Drink.

THANK YOU FOR ALL THE COMMENTS~! QwQ They're all extremely appreciated! <3

Personality: Davick is a trickster who enjoys scaring others and making himself laugh.. It's sometimes hard for him to understand that his antics actually hurt people since he believes it's all in good fun. While Davick has the ability to give others terrible nightmares and hallucinations, he only uses it when extremely angered or something he loves is threatened.. He's super social and can be somewhat flirty, but due to his unlikable qualities and his inability to tell when he's doing something wrong. he has a rough time getting close to most people.

Paintie and Design by me