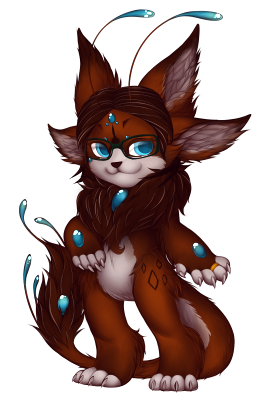 The sooner you stop trying to please people, the happier you'll be.

It's not your responsibility, or your duty, to keep other people happy. No one gets to tell you what you can or can't like. It's not your responsibility to shelter or coddle others to avoid offending them. If people don't like an aspect of who you are, if they try to put you down or call you out because they don't like something you're into, they don't deserve to be in your life.

You aren't here for the sake of other people. The only person you need to please is yourself.

A stubborn and feisty Gembound explorer with a sharp tongue and a quick temper. His intentions are good and his heart is in the right place, but his questionable vocabulary, attitude, and tone of voice often get misinterpreted as condescending or demeaning, which makes him rather unpopular with a lot of people. He tells things exactly as he sees them, regardless of how blunt, and has a "take it or leave it" approach to most things. The approval of others means absolutely nothing to him, he does what makes him happy and that's that.

He travels around the world of Furvilla with his spouse and the rest of their "family," taking up temporary residence in each village before hitting the road again. He's been to every village at least once but doesn't really feel like any of them are a place to permanently call "home" as of right now. Perhaps in the future, his feet will lead him to new villages that he's not yet seen and one of them may entice him to settle in permanently.

His most notable traits are his god-awful eyesight and the empty gem cavity on his left cheek. He says he was born with a number of gems missing from his body, which he's been working on replacing, but there are suspicions among the group that the gem fell out when he walked full speed into a wall while not wearing his glasses.

Andy, of course, denies that any such event ever took place.

He collects gemstones in various sizes and colours, sometimes trading them with other explorers or merchants if they have gems that match his natural colour and are the right size to fill one of the cavities on his body where gems are missing, either from his birth defect or where they've fallen out over time.

His likes include his spouse, the colour blue, cool cloudy days, and attempting to fight the monsters that try to steal his exploration loot.