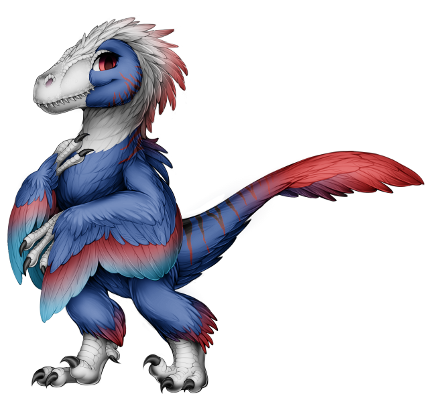 You'd better move out of the way, the Queen of Sass is here and they'll take none of your bullsh*t.

Tom is the leader of the pack's hunting expeditions. He could be a competent leader of the pack, but instead he's chosen to live a life revolving around what he's passionate about; food. He's got the one trait that everyone's jealous of, Tom can eat loads and not put on a single pound.

Tom is also different from other pack members in that he's got sass, a lot of sass. Snapping fingers and the occasional "mm hmm" are commonplace with Tom. It'd be wise not to have an attitude with Tom, as he has the potential to dominate those he speaks to. Even the pack leader has no business getting on Tom's bad side.

Tom does have a soft side though, he's not made of stone. For those he holds dear, he is a great friend and he'll fight to protect those he loves.

Gifted in the performing arts, Tom one day hopes to acts for plays and other theatrical productions. He dedicates his free time to bettering his acting skills and broadening his knowledge on entertainment and media. There's no doubt in anyones mind that, one day, Tom will grow to become a gifted actor.

Unlike other members of the pack, Tom doesn't suffer from any mental illness, though he does have confidence issues. He can put on a confident facade, but deep down he never truly believes he's capable of success. Tom does posses the skills to strive for excellence in life, but he needs a lot of time to believe that.

His tough but quick-witted demeanor is what makes Tom perfect to be a hunter and an explorer. His fierce passion to dominate the stage makes him and competitive, yet highly effective, at his jobs.