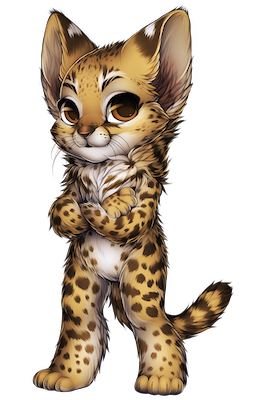 Karra is very stoic and serious, and has somewhat of a temper. She is highly associated with fire, and is almost always has a neutral expression unless angry or particularly happy. She can get quite sassy at times, as well, making sarcastic comments and throwing shade. However, she's a bit of a sap, and even if she tries to pretend not to be, she is quite a dork under that calm exterior.

She can use fire in many ways, conjuring it easily. Her uses of it range from something like the move Flamethrower from Pokémon, where the flames shoot from her mouth, creating raging infernos out of nowhere, to simply holding a small flame in her hands/paws. When she is particularly angry, smoke may come from her nose and she might spit small flames, not unlike a dragon.

Be warned, though.. It's best not to ask her to toast your marshmallows for you. You may end up with a toasted tail instead!

Karra was my first fursona, and I still cherish her very much! She doesn't quite represent me now, but I still consider her one, regardless.