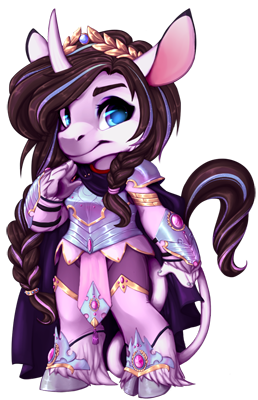 Standing at 5’11” and weighing 140 pounds, Rory is curvaceous but physically fit for combat. While Aurora is taller than the average human woman, she's considered short by Protokeros standards. Her glossy coat is an off-white color that, in certain lights, can appear iridescent. Her long mane is a chocolate brown color, and she keeps it neatly tied back in several braids, with the exception of the slightly curled fringe framing her face. Her eyes are identical to her mother's, starting at a deep violet and fading into a rich teal-blue. Like with all Protokeros, her multicolored eyes are a racial trait, and they have a luminescent quality, seeming to almost glow at times. Her shimmery silver hooves are cloven, unlike those of the Hevonandar, and she also possesses five digits on her hands. The Protokeros are one of the few animal-based races with this feature.


Aurora can be very trusting, sometimes to a fault and it can make her seem somewhat naïve. She is generally kind and friendly towards others, though she has a fiery spirit, and has quite a temper when riled up. She’ll be the first to tell you how she feels if you’ve really wronged her, though minor annoyances usually slide by with just a few complaints to herself. She is also easily startled, no matter how hard she tries not to let herself to be caught off guard. Rory is self sufficient and headstrong, and able to get through almost any situation. At times though, she can be too stubborn, and a bit irrational when she's upset or angry.


Traits: Generous, Respectful, Friendly, Adaptable and quick to learn. She's always willing to do her part for the greater good, and never expects special treatment because she is royalty.


Flaws: Can sometimes be judgmental and quick to anger in the presence of very loud or overbearing characters, mostly in the case of them being less than scrupulous.


To read more about her backstory, visit her official Character Sheet: http://starkindlerstudio.deviantart.com/art/Aurora-Starkindler-566977214