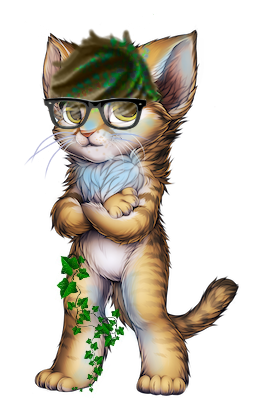 "H.. hello?" the little cat speaks in a whisper as you approach, through a jungle of strange unnamed foliage. They are tending to seedlings in a greenhouse, but seem to shy away as you approach. There are plants everywhere, and the place has a peaceful, quiet atmosphere. from somewhere, soft, calming sounds are playing.
----------

No one would know it, but this shy, almost mute herbalist was once an excellent warrior.

Luka has always been a quiet cat, preferring to play by themselves among the clouds than explore with the other Quetzal palace youth.
Nobody expected Luka to pick up a weapon- and nobody thought they'd be so good. With only a dragon tooth and some old reed, Luka fought off monsters with a calm fury, and never said a word about it.
Until one day, Luka lost a battle.

No big deal, right? Everyone loses sometimes.
Except - the rare dashfly didn't give up there. Early in the morning, in the small hours where most of Quetzal palace is sleeping (apart from those odd-eyed villagers with glowing eyes and queer markings, and voices like electronic glitching. Those ones no one talks about)
The dashfly came back.

It woke the world with a piercing screech, causing the furries of Quetzal palace to rise from their cloudy slumber and flee in mass panic.
This was no ordinary attack, this was revenge.

Luka, woken by his mother's cry, took up their dragon tooth knife and stood.
The rare dashfly headed straight for Luka.
Where had this sudden strength come from? It had gone berserk! Luka tried all she could, but the monster was too strong, too fast, too angry.
And Unknown to Luka, their little toddler sister was awake and nearby, free from her mother's grasp.

The monster, satisfied with the wreck it caused, flew into the starlight.

Where Luka's sister's body lay, a singular daffodil seed , soft in the silent mourning of the village, rested itself, and grew. . .

Nowadays, Luka hardly talks of their family. After all, no one ever knew what became of their parents. They prefer plants to other furries, an exception being Asteria, the alchemist with whom he works closely.