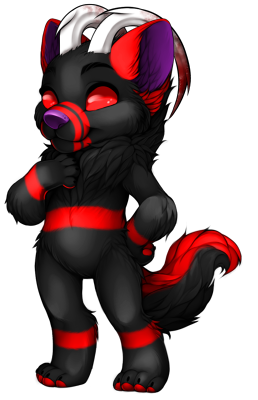 History:
is mom took advantage of his dad's sweet nature and had forced him to conceive against his will. It was a tough birthing process and practically took a day, a couple of sacrifices, and a lot of blood, but finally out came the demon hybrid known as Ritsu. Even though the child was made in an ill way, Ritza still loved it as it was his own blood. However, no matter how hard he fought to be able to see his own, Tsui kept him as far as possible from the babe as she raised it to follow her ways. In these years, The Dark Lord himself visited the castle of the child's residence and promised that He will gladly set a high place in his army if the child continues in his horrendous ways. With this, the child trained, followed commands, and did the worst a hybrid could ever do.

Finally at 400 years, Ritsu Tenma Chi chose their sex and fought his mom to prove that he has surpassed her teachings. He gained her spirit and consumed her being to attain her abilities. After training himself, now 10,000, Ritsu left his mother's castle in the Dragon Domain and searched for his father in the Fey's Forest. After months of hunting, he finally found his father's humble regency in a fantastic opening very deep in the thick forest. Ritza cried in happiness at the sight of his son and immediately brought him into his arms. Of course, Ritsu responded to this close encounter by striking, but much to his 'demise,' Ritza immediately stopped the attack and laughs. "You still have much to learn, my young demon."

And with that, plenty more years of training and a hint of of softening Ritsu's harsh personality. When the time came, the hybrid happily fought his father and instead of treating the old demon's body like the mother's, Ritsu actually gave his father's bones a nice resting place and carried the Chi's last name in pride for years to come. Soon after a long time of torturing, killing, and very small bits of helping, Ritsu had received a letter from Him and gave permission for the hybrid to go to Earth and do as he pleases. Which is exactly what he did.

Now seeing and doing everything imaginable, Ritsu decided to stay on Earth to see how the beings evolve. The have grown extremely interesting. The different cultures, prejudices, evils, wars, technological advances, everything. However, he feels their time is coming to end very soon as he and many other of his gained demon best friends will destroy the inhabitants to make way for newer and better ones. But as for right now, he's enjoying his stripper life.