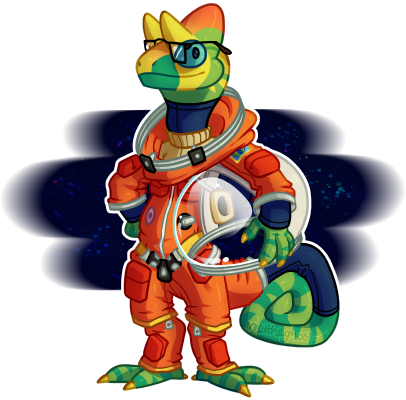 Hello there, my name is Jules! I've been told I look and act like one of your Earth "chameleons," but I'm actually an extraterrestrial from a distant planet. I'm a member of the Interspecies Exchange program on Earth and I'm a crew member of the USS Alliance, one of the first FTL-capable starships. When I'm off-duty, I like to draw in my sketchbook and watch Earth films (my favorite is "The Fifth Element!").

Jules is my fursona! I use them as a persona for myself online. Jules and I have the same name, personality traits, opinions, and mannerisms - the only difference between us is that Jules is an alien from the future with a much cooler career!

Jules is fearless in the face of the unknown - what adventure should they go on next? I might turn my favorite adventure ideas into Jules' next paintie, please comment with your suggestions! Jules' paintie got nominated as a Daily Deviation on Deviantart! Such an honor! You can see it by clicking here!

first image by juno. second image by Hatty . third image by Charingo . paintie by me. css template by Whipptail