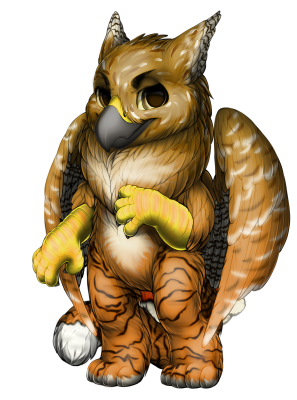 Flintlock was born and raised in rural Tigereye Peak, a unusually serious child amongst is more happy-go-lucky siblings. He was determined to make his family proud, and worked himself to the bone for everyone's survival.

After trial-and-error at several tasks, he began to develop a talent for reading the signs of the wild, tuning himself into the cycles of nature. Finally, one spring, his hard work paid off in valuable skill: Crops he had planted in a small, separate garden of his own began to grow slowly, but strongly. He carefully worked the frost-hardened soil with chill water gathered from the family well and a fine sprinkling of evergreen mulch, checking his plants for pests each day.

Come harvest season, the crops were ready. Flintlock picked and prepared each one, making a special meal for his family. At this point, he was just old enough to leave home, and his parents knew it. This was the final sign. According to family tradition, they sent Flintlock out to establish his own home, only to return for brief visits or if his own farm failed. He gathered a talonful of seeds and a few home-cooked meals, and set off for Tigereye Peak central.

Crimsonette had never asked for help. In fact, she never really wanted it, especially from a warm-blooded creature such as Flintlock. Sure, she wasn't completely exothermic herself- She'd made it this far, after all- but a pioneering step for her friends, family, and people wouldn't be nearly as meaningful if some mammal (or bird, she supposed) stole the show. However, the journey was harsh and treacherous, and by the time she made it to the city, she was exhausted. For the first few days, she stayed at the clinic, soon alert and keen on taking notes by the fireside. Eventually, a bear offered her a home in a small, rugged wood cabin a few miles out of town. It was only a few FurCoins, which was a sure sign of a bad deal, but she didn't have much choice, did she? Crimsonette spent her last few coins she'd brought from home, and set off on course for the cabin.

Flintlock found her snuggled into a carpet, borderline comatose and starving. She had a small pile of papers and a pen next to her, with tiny scribbles and sentences indicating how she didn't know how to grow or catch any food, and how decrepit the cabin really was. Flintlock picked her up, carrying her into town for some heat, medicine, and a warm meal. After a while of recovering and preparing herself to go back, Crimsonette begrudgingly accepted that she should thank the orange-and-brown figure she vaguely remembered. However, he was nowhere to be found.

While she'd been recovering, Flintlock had gone out to help fix up the cabin. He wasn't the best construction worker, but he was determined. If anything, helping the snake would serve as practice for building his own home. With any luck, he'd be able to show her how to grow things as well. Then, they'd be off as unlikely friends, and he'd build his own home to settle down in.

Of course, things don't always go as planned. Flintlock soon realized Crimsonette was terrible with plants (being armless certainly didn't help). She began losing hope, thinking she'd have to go home with little to no new knowledge on the area. After all, she'd failed to survive the expedition on her own, and the newcomer, although begrudgingly not unwelcome, had shown no intentions of leaving. Eventually, Crimsonette asked him to leave, and explained why.

Flintlock had come so far. He'd honestly become interested in befriending her on a higher level than "fortunate acquaintance," and with Crimsonette never having learned how to fend for herself, he was pretty sure he'd be leaving her for dead. For a while, there was an awkward silence between the two, Crimsonette occasionally accepting food offerings when Flintlock wasn't looking, and Flintlock working seemingly tirelessly, tending crops and doing repairwork. Eventually, Flintlock had an idea. He asked Crimsonette if he could stay, saying he'd pay for someone to do proper repairs and make an extra room for him. He'd try his best to get them to split the housework, and in exchange for her stepping up and letting him stay, he'd be willing to act as a guide, answering her questions about Tigereye Peak's people and environment, as well as ferrying her around if she took a long trek. Crimsonette apprehensively accepted, angry at first. Slowly, though, she became more optimistic, seeing him as an object of cultural study.

Ever curious, Crimsonette began to fill the snowy silence with thousands of questions for Flintlock. It was rather annoying at times, but he didn't mind.

She was better an annoying roommate than a dead explorer he could've saved.