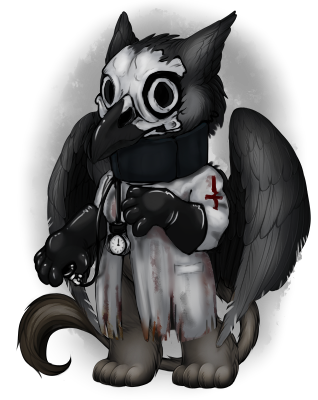 When Lynne died, one of the first spirits she encountered in the After Life was that of Kevorkian. Now he follows her around everywhere, picking up random garbage and giving it to her as gifts. He doesn't say much. but he's decent company for a very dead ravengryph. It's debatable whether one should trust his poultice and salve-making skills, considering that's what killed him in the first place.

Kevorkian's face has long since melted off, leaving the skull exposed, an unexpected result from a particularly strong brew of... stuff. Upon death, his license to practice was nullified, so technically Kevorkian is an Explorer. He still dabbles in medicine occasionally, because honestly, who regulates the dead?