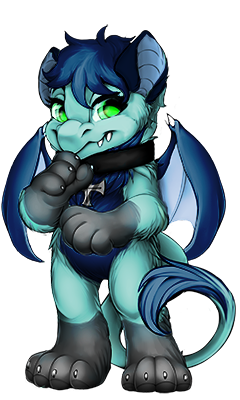 https://toyhou.se/686567.marr
Marr was born with a strong determination, and the will to carve her own fate.
The small island she was born on held expectations of her—desiring to make her the future queen. And while she had the support of her family—her mother, step-father, step-brother, and grandmother—she was alone on the island, being the only of her kind. With her father’s draconian blood marking her out from the rest of the island’s inhabitants, she grew to be an outcast within the society.
She grew anxious to see who her biological father was from a young age, and after years of being dissuaded, she finally made the decision herself to sail from the island and go in search of him herself, with or without the support of her family. In the end, Puff, her step-brother, and her grandmother accompanied her on the journey to the mainland. Having never left the island before, Marr learned many lessons about navigation from her grandmother on this trip—and to gain respect for the elements, as the ocean is a fickle and harsh beast. And even though she has wings, they aren’t strong nor large enough to carry her any distance—but more importantly, she would never abandon what family she has with her here.
Upon reaching the mainland, it was surprisingly easy to locate the whereabouts of her father. As fortune would have it, he’s a renowned and celebrated hero among them! While this made finding him easy, it was daunting, and haunting in a way—he may have become a hero here, but why would he have left his daughter? Has he redeemed himself, does he feel regret, is he truly /her/ father?
And yet, upon finally meeting her father, it was nothing but a bitter reunion. He seemed to have no interest in her, only drawling on about his achievements and how he ought to be treated by his visitors (cough, that’s not very subtle). He had a bloated sense of pride, and when she departed again from family—from him—she felt hollow.
She had a future back on the island where she was an outcast, but after realizing what her biological family was, she desperately just wanted to start anew. A fresh slate.
She remained on the mainland, finding other creatures like her, and forming a new family. Maybe not in blood, but in the joint companionship of making somewhere to finally belong. And in this new group, the determination that served her well in getting this far will see to it that she will make a place that she is proud of.
Among this group remain the family that travelled with her to this land. Puff, while being younger, possesses a bright spirit that makes others feel at ease (which is helpful around Marr—her presence can be a bit overpowering to others, and her intensity works to both instill inspiration in others, but also can overwhelm them). Puff helps to remind Marr to relax and keep positive, and after the disappointing confrontation with her biological father, he was one of the few lights in Marr’s life.
Her grandmother, in contrast, served as an advisor and teacher. With Marr having been raised for royalty, being a leader came naturally enough—but being a leader that others would follow, that could keep a cool head while being tested in these new lands offered an entirely new challenge that Marr could never have anticipated. And if she was ever in doubt, she had the comfort of having an old head around to sort out some of the troubles. Though her grandmother could be fickle, and would often present the answers Marr sought in many ways. Versatility is vital, and if Marr could learn to think about problems from many different angles, and sort out any string of puzzling words, then she could rest easy, knowing that Marr will have learned to use her brain and have faith in her decisions.

(Marr was the first ever Grausocken Drachen, created 2014)

Bio was refined and written by Sassibirb !