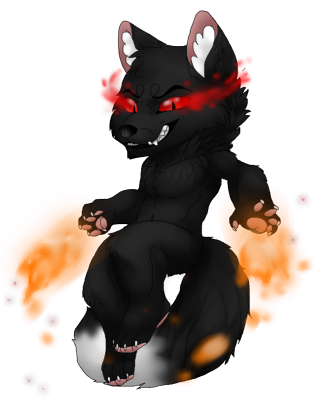 Nukké is the long-lost brother of Nukka. He died as a young kit, and came back as a half-blood deamon. Because of his higher-than-average ranking in Ellfa before he died, his deamon rank is Sire, one of the higher titles in the deamon ranks.

As he came back to Earth, his snow-white fur turned solid black, and his beautiful light blue eyes reversed to a deathly red. His personality also reversed, becoming hostile and direct rather than the soft-spoken pushover he was previously.

Because he is a Sire, and a high-blood deamon, Nukké in turn gets a deamon servant. This servant is Ebbie.

Nukké also prefers his human form over his fox form, and chooses to harass his brother to do so as well. This, unfortunately, is the case.