13 Nov 2019, 8:33 pm
in Closed - Catching Up (go to post)
errorgoat aaa thank you for understanding!! :')) this is like the second time I've taken on wayyy too much stuff on this site and I hope nobody thinks I'm tryna scam them or anything,, I'm just the big dumb™

13 Nov 2019, 8:09 pm
in Closed - Catching Up (go to post)
Rhenarra EvoryGrimoire Imoku Oliver_Woolfe Davin HalloweenBatRat RoseGem Ais_linn StrayChowChow errorgoat Aesthetically_Weird darzie
heya y'all I feel super dumb and awful for doing this but there's no way I'm gonna get these all done before the shop closes-- that's totally on me for overestimating myself-- feel free to cancel any trades, and I'll go through and refund all the transfers!


Moonbeau since you're the only person I gave a list of what I'd like from the shop and you already bought them, I'll still be finishing your art! so far I have the paintie done ^^"

I'll likely have other pop-up shops here and there, though! 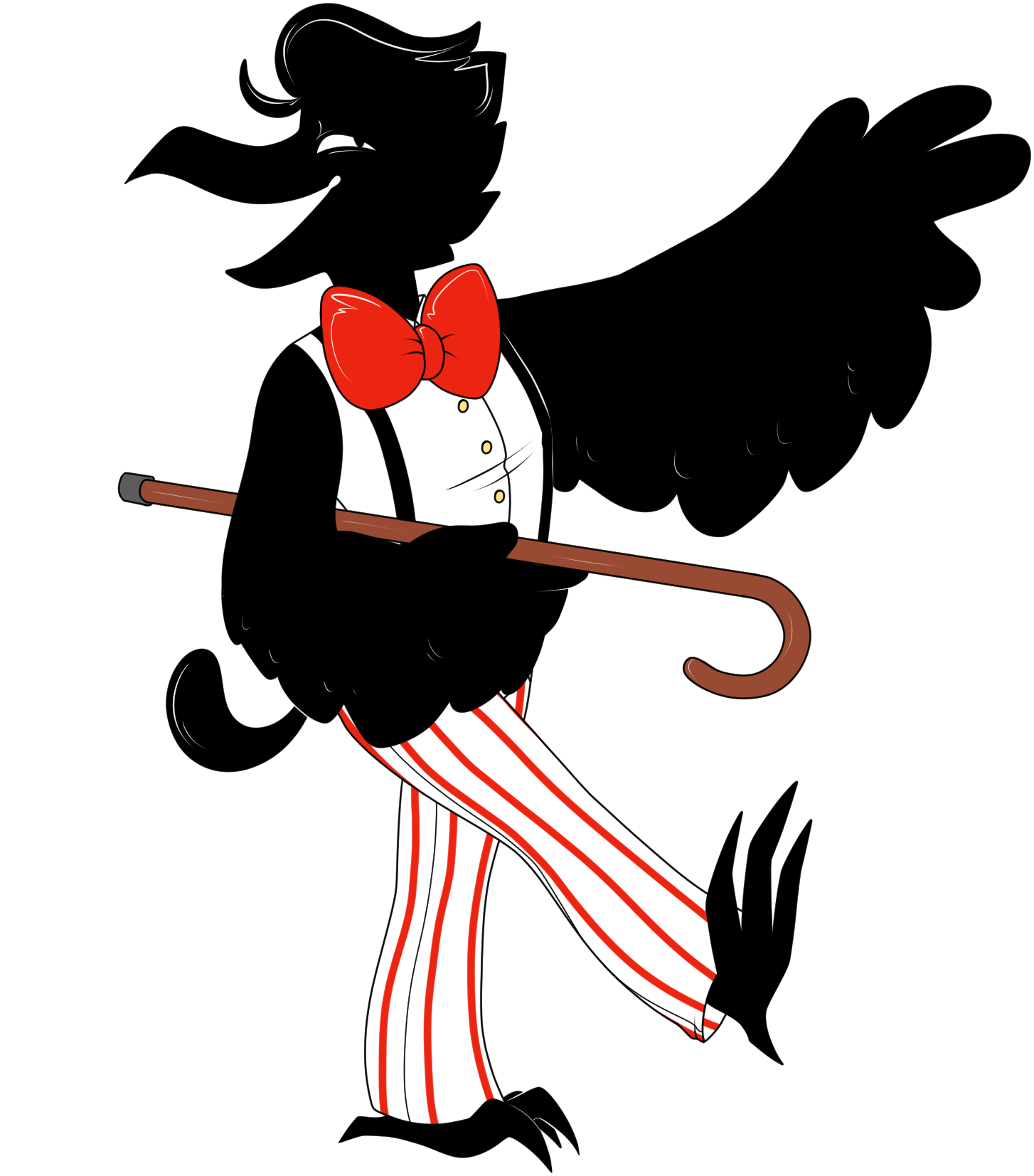 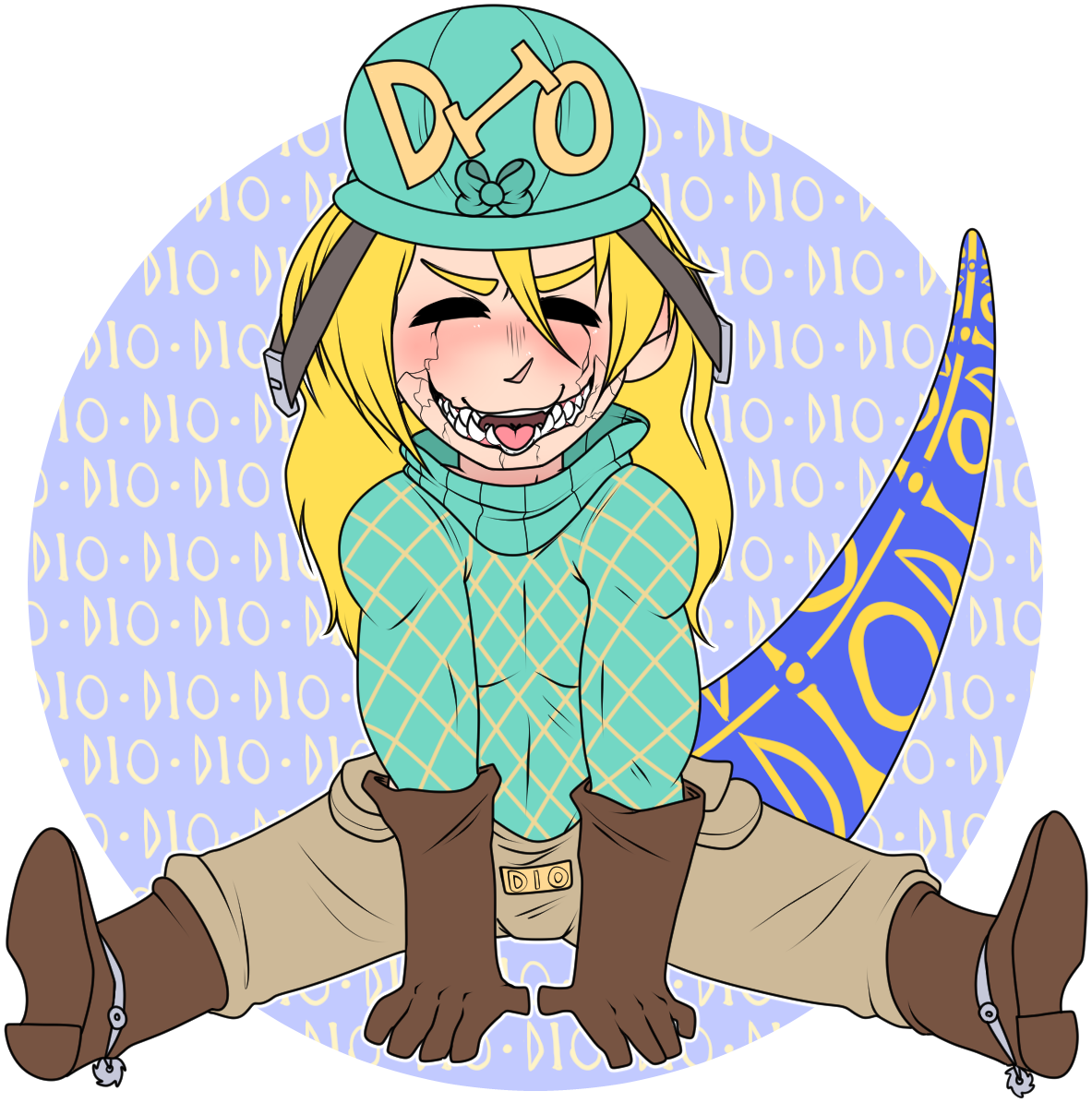 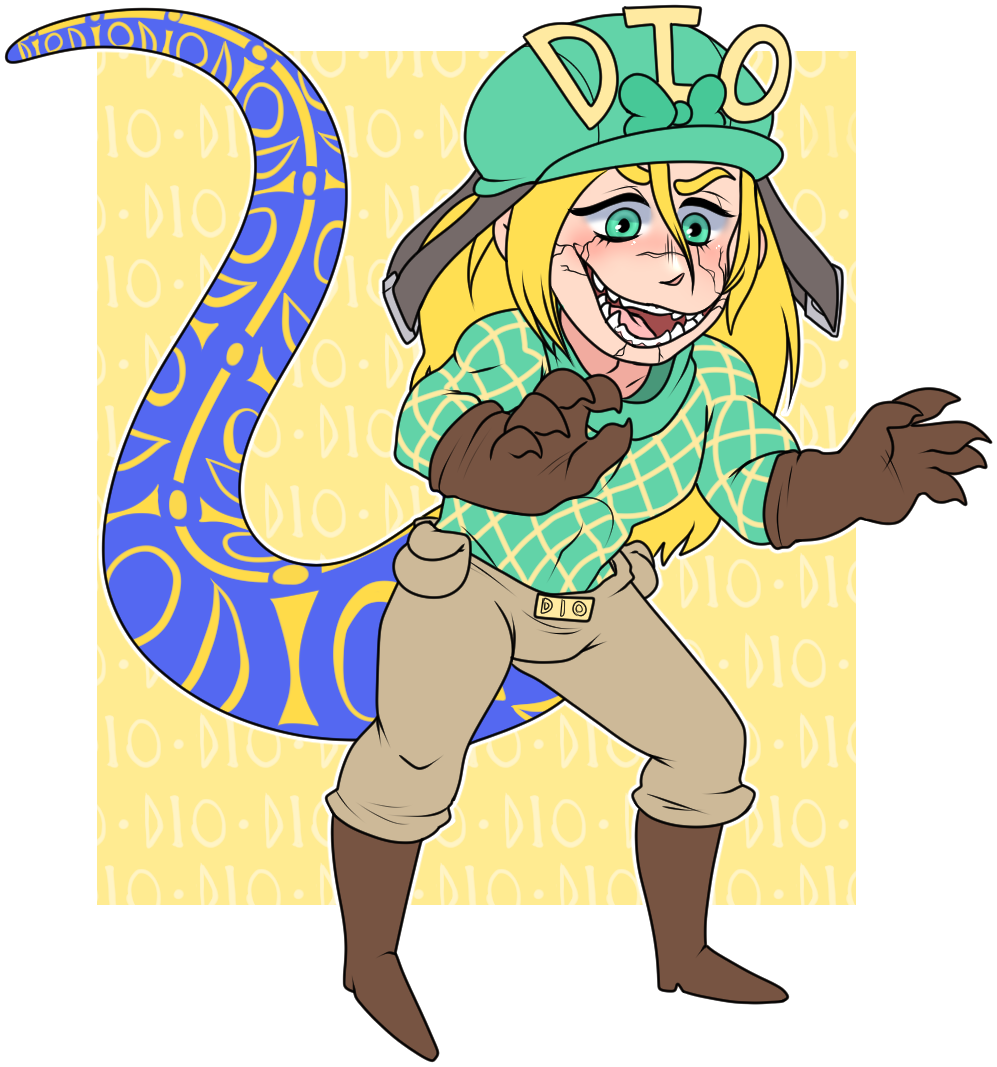 5 Nov 2019, 7:21 pm
in Closed - Catching Up (go to post)
omg I wasn't expecting this much attention-- I'm gonna go ahead and scoot you all in as the final slots since the event is ending soon! I'll consider reopening a normal art shop as well! but for nowww:

Imoku absolutely can do! feel free to send the tickets in a trade and I'll accept them as soon as I've finished the art! <3

Oliver_Woolfe you bet! feel free to send the tickets in a trade and I'll accept them as soon as I've finished the art!

Davin that's totally fine with me! it might take me a bit to get to all of it, so I'll let you know what items from the prize shop I'd like after I'm a little closer to your order!

HalloweenBatRat absolutely! that's just the 10 tickets, feel free to send in a trade and I'll accept after the art is done!

RoseGem you bet, and that's correct! I'll let you know what I'd like in return when I get a little closer to your order! <3

Ais_linn you bet! throw me a ref and that's 25 tickets, feel free to send in a trade and I'll accept after the art is done!

StrayChowChow that works perfectly for me! feel free to send the tickets in a trade now or as I get a little closer to your order! whichever works best for you!

Rhenarra I can absolutely do all of the above! that'll total 95 spoop points, I'll let you know what items I'd like in return when I start your art! <3

errorgoat you bet!! and omg thank you,,, ;w; throw some refs my way and feel free to send the 45 tickets in a trade whenever!

Aesthetically_Weird absolutely can do! just send a ref my way and the tickets in a trade whenever!

darzie I can absolutely do that! <3 feel free to send the tickets in a trade whenever!

5 Nov 2019, 3:14 am
in Closed - Catching Up (go to post)
Moonbeau that's no problem at all!! <33 if at all possible, could I get 5 DMM Sticker Packs, Count Battington's Book of Blood Magic, one of the shield and weapon crystals, 2 Jack-O-Lantern Capsules, a Magic Witch Red Panda Sticker, and a Magic Ghostie Manokit Sticker?

Fredbear you bet!! shoot the refs my way and the tickets in a trade-- I'll accept when I finish and send the art! <3

Rhenarra EvoryGrimoire yes! let me know what you'd like and I'll let you know what equivalent item(s) I'd like in return! <3

Moonbeau they are! just be warned that obviously tons of stuff might take extra time haha-- and I absolutely can do! <3 feel free to send the tickets via trade and I'll accept after I send the art! <3

anyways! I'm doing some doodles for spooky tickets! these are all flats because I'm lazy :'))) but here are some examples and ticket prices! 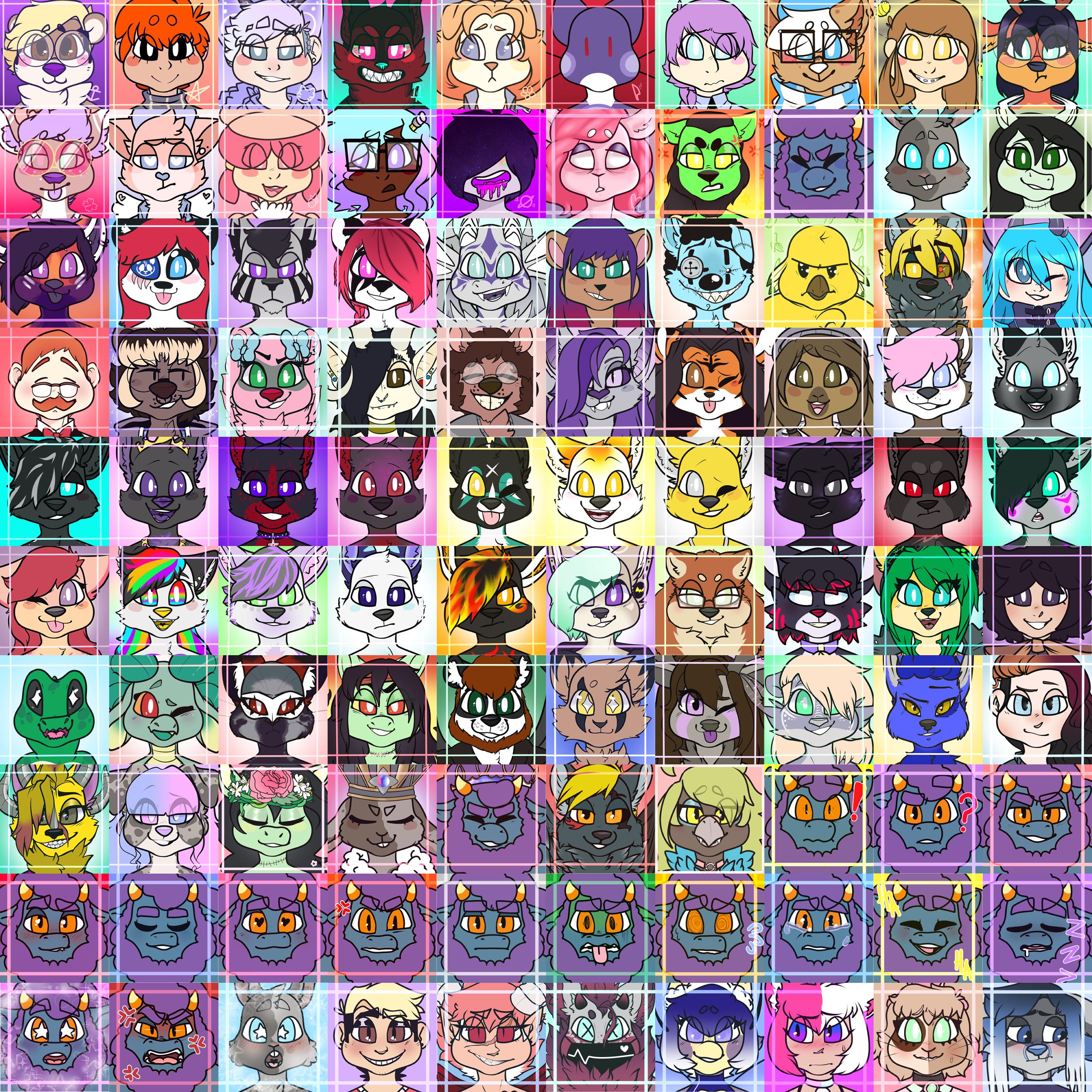 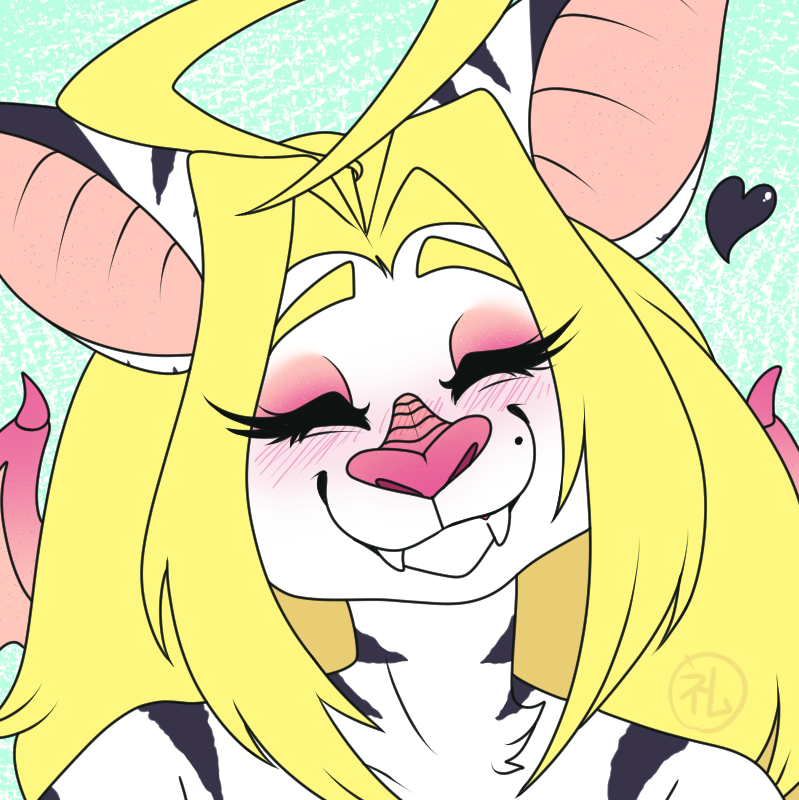 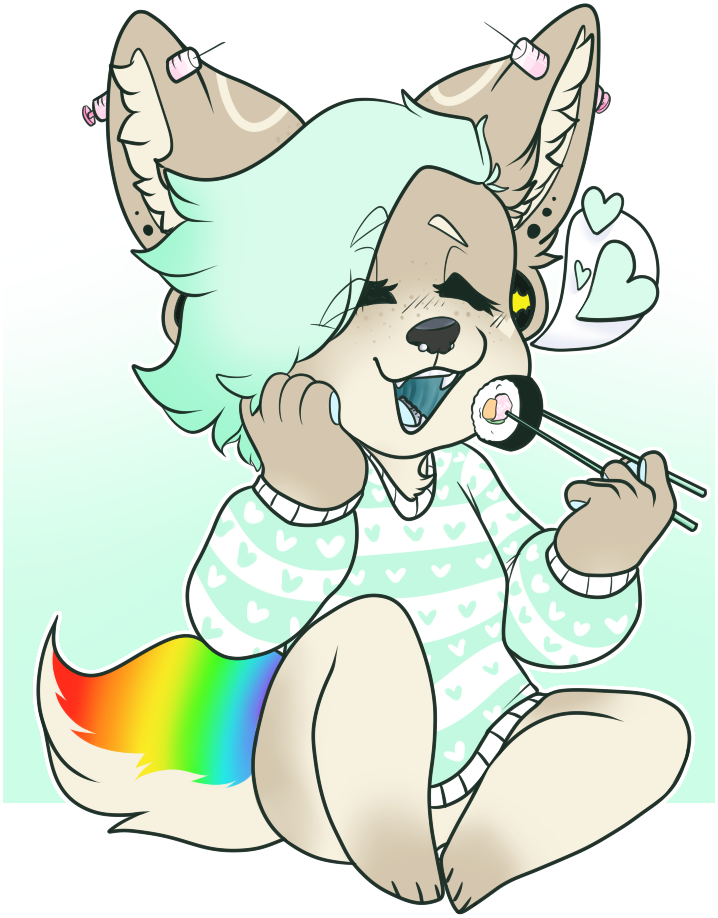 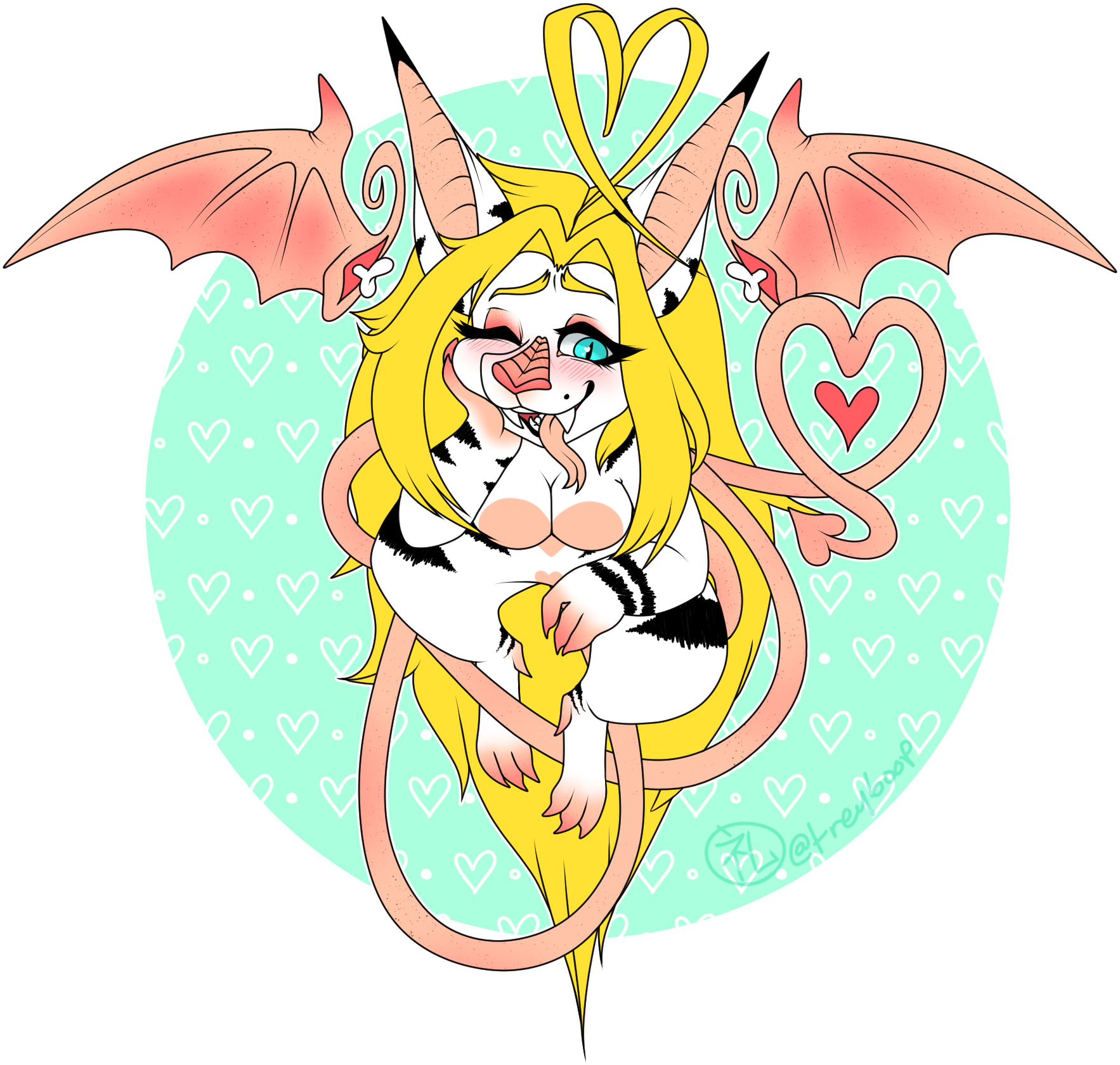 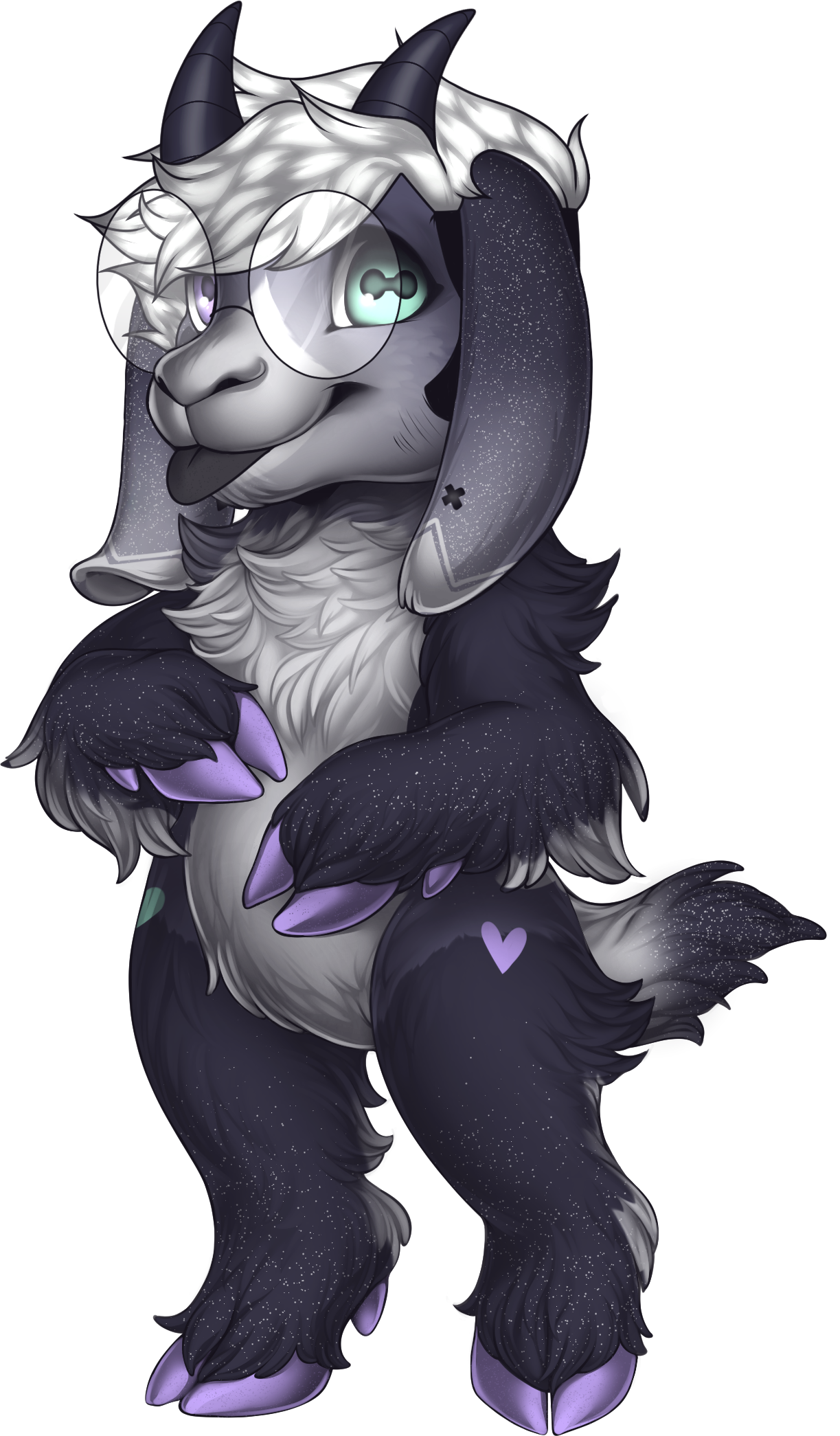 (Title edited by MOD-Palrex for all caps) 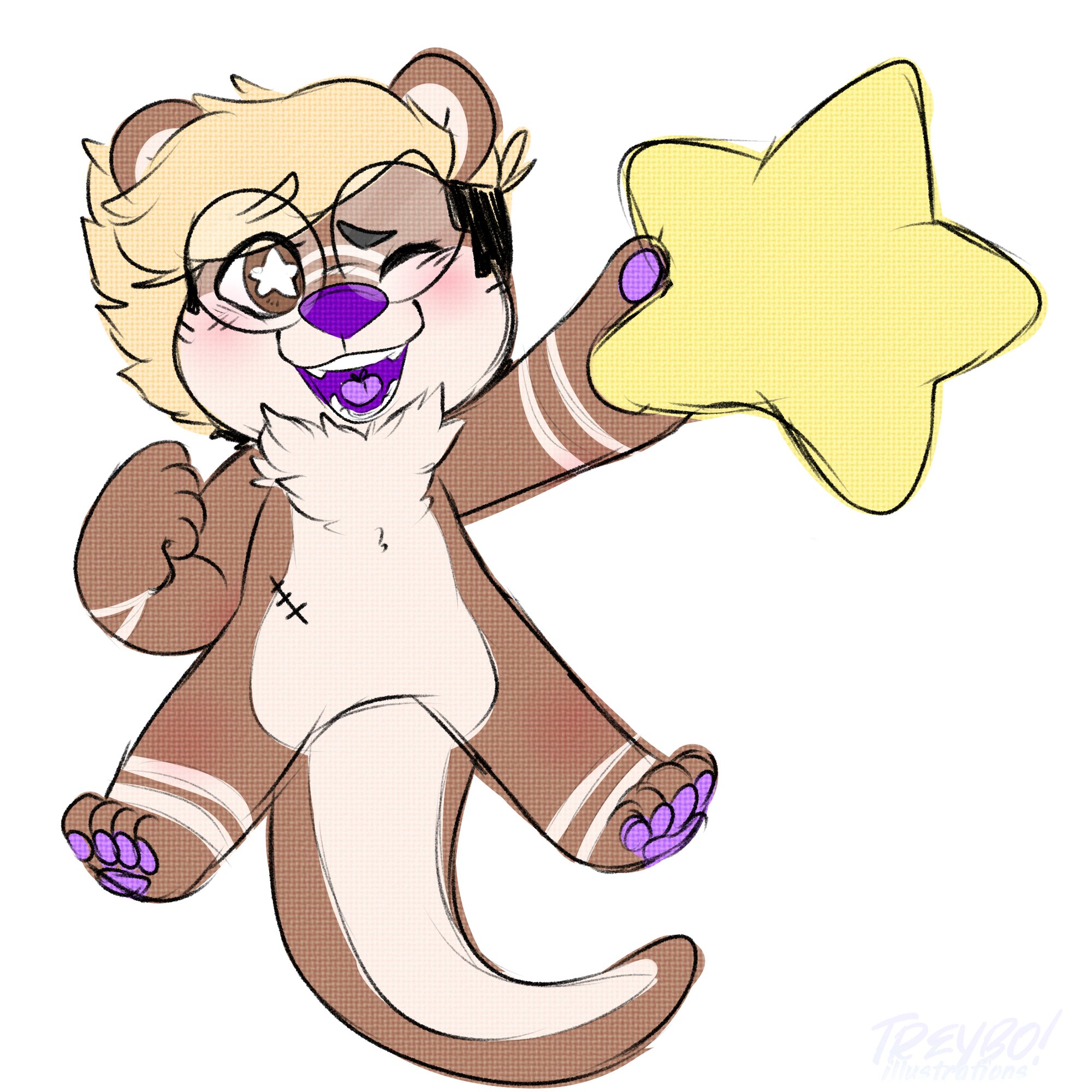 yay! I'm so glad to hear you're still doing this! <3 if it's not too selfish-- I would prefer that pip's hair be the short version (without ponytail) but that's it!! I'm so excited to see how you bring my boys to life! <3

"WHAT IS A GEM RAPTOR?

Gem Raptors are a type of theropod dinosaur native to the Arctic Circle, though some groups of raptors have migrated further south. Raptors that live in the Arctic Circle are known for the thick, luxurious white fur and feathers that they sport during the winter months. This winter coat permits them perfect camouflaging against the snowy tundra they live in. When spring occurs, their white fur and feathers shed to reveal their summer coat, which varies in appearance from raptor to raptor.

Raptors that have migrated further south do not sport a winter coat and exist with their summer coat all year round. They are an endangered species and often found in small packs. Gem Raptors are named as such because of the large gem set into their chest in replacement for their heart. They are born with the gem, and the color of their gem always matches their eyes.

WHAT MAKES A GEM RAPTOR?

- A large gem set into their chest that is the same color as their eyes.
- The gem and their eyes glow.
- They have large wings that grow out from their arms.
- Raptor claws on their back legs.

Other features are applicable depending on preference. Most raptors have tails that stick straight out like a dromeosaur, but some have tails that drag. Some have horns. Feather dispersion varies depending on the particular animal; some have feathers on their heads and tails but for the most part feathers are only required on the arm-wings.

Their arm-wings permit them the ability to glide, but raptors cannot fly. The wings are simply not large enough to permit this. Young raptors get a lot of enjoyment from finding large icebergs and gliding off them, while adult raptors use the gliding primarily to ambush prey animals.

WHAT KIND OF MAGIC DO GEM RAPTORS HAVE?

Raptors, being primarily arctic creatures, often have ice and snow related powers. This permits them to control their body temperature and avoid freezing to death on the tundra. Raptor groups that have migrated south may have varying abilities, but they always retain an ice/snow magic affinity regardless of what additional magic they learn.

They store all of their magic in the gem set into their chest. The gem is highly sensitive to magic and capable of storing different types of it quite easily. They are capable of picking up simple spells with ease and can store the energies of multiple elements in their gem. Whenever a raptor casts a spell, the gem on their chest will glow, though most raptors will engage in attacks that burst out from their mouths (such as a freezing wind that they can shoot from their maw).

WHAT KIND OF SOCIAL RELATIONSHIPS DO GEM RAPTORS HAVE?

A gem raptor, despite the implications of their name, is not a terribly violent creature. Dominance in the pack is typically decided by who can create the most impressive light show on their body. While they hunt for small animals in packs, it is extremely rare to see a gem raptor behave aggressively toward something that is not a prey creature. For instance, interactions with other anthropomorphic creatures can be cautious, but a raptor will never approach another creature with aggressiveness.

Raptors can communicate with each other and other creatures by means of body language and assorted noises like chirps, squawks, trills, and bird calls. By the time a raptor reaches adolescence and has started work on their body's light show, they will have created a specific song to go along with it. The pulse of their lights matches the song that they create for it.

Being intelligent creatures, raptors are capable of picking up human languages, though their use of it is scarce. They can string together simple sentences and communicate at a level that best fits a human child. Raptors, because of the anatomy of their mouths, often speak in a lisp. Some raptors, with great practice, can enunciate better.

Raptors that find a mate will present the mate with a feather from their wings that has a custom light pattern on it. The pattern remains alive in the feather for approximately twenty four hours, on or before which the other raptor will respond to the request. Raptors are primarily monogamous creatures and lay clutches of 2-4 eggs.

All gem raptors are born intersex, meaning that they possess both hemipenes and the ability to produce ova. Like most reptiles, their sexes aren't visible from the outside. Immature raptors don't start to mature until they go through puberty at about five years of age. By the time they are ten years old, they are fully mature. During the transition time between five and ten, they are considered teenagers, and will often leave their home pack to form their own pack during this time period.

There is no real concept of gender in a gem raptor society, as all members of the species are capable of laying eggs. As a result, when encountering societies with gender, they often get confused. Most raptors that interact with other cultures and assume a gender prefer being called genderless or androgynous, but others might identify more strongly with males or females, or other genders."

3 Sep 2019, 12:44 am
in suspicious adventure wheel? (go to post)
Connor_Murphy thank you! I wasn't sure if I should sell it or not, seeing as the stall price is crazy-- but I think I'll go ahead and use it haha

2 Sep 2019, 11:11 pm
in [T] [EVENT] Magic sticker recharge station (go to post)
tbh I'm not too terribly sure what events these are each from, but here's all of my stickers (there's not many haha) -- http://www.furvilla.com/sticker-album 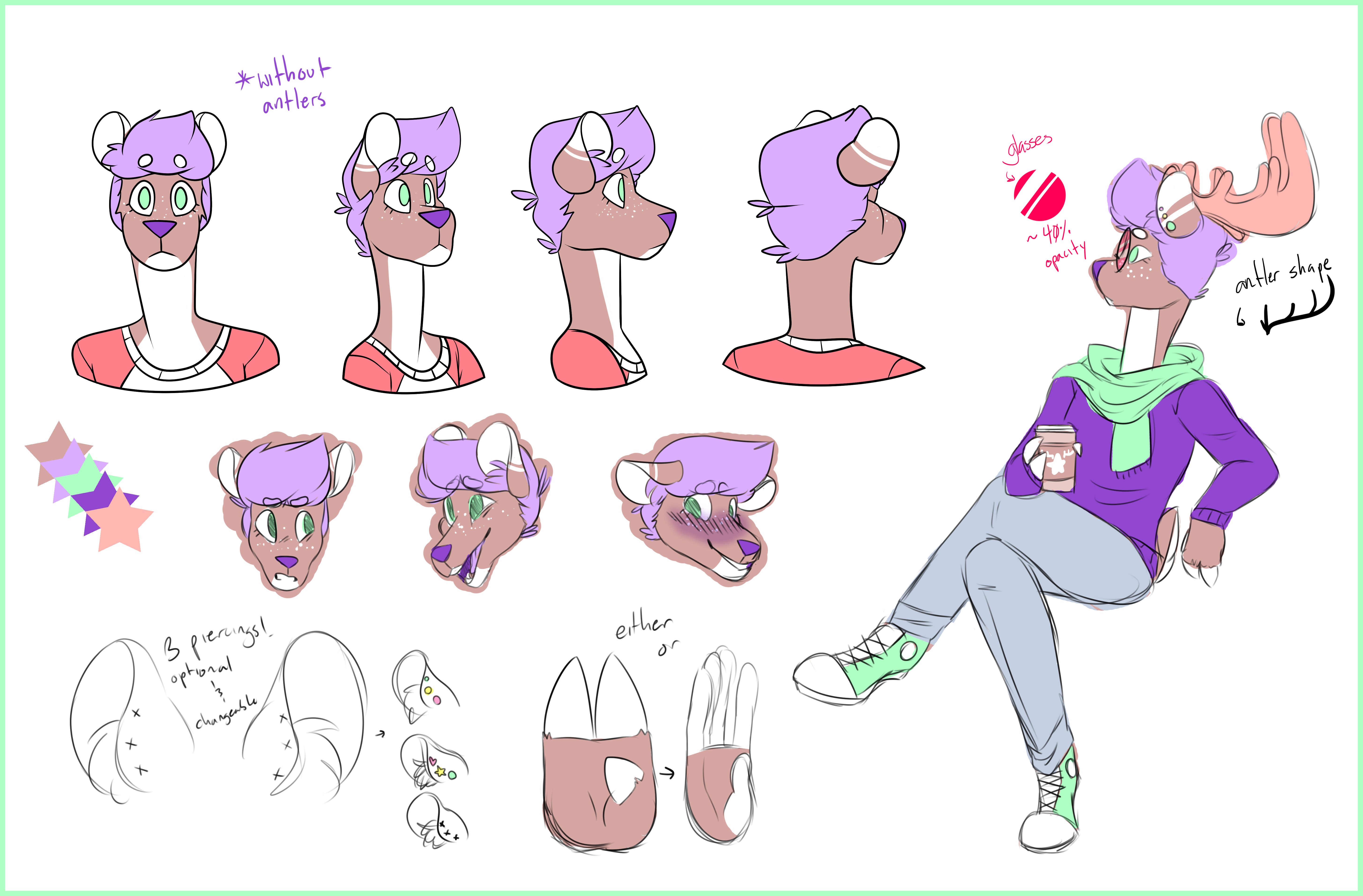 https://toyhou.se/951777.bo/gallery
Flower Colors (Up to 3): lavender/white
Leaf Colors (Up to 2): mint
Butterfly Colors (Up to 2): pink
Animations: butterfly
Extras: eyelashes, small mouth, other: would you be willing to do his antlers?
Payment: FD
Notes: his freckles are a must-have! <3

here's my toyhouse if there's anyone in my trade/sell folder you're interested in or just to see who you might want to draw: https://toyhou.se/treybo

could I get some more? is there a limit on these? 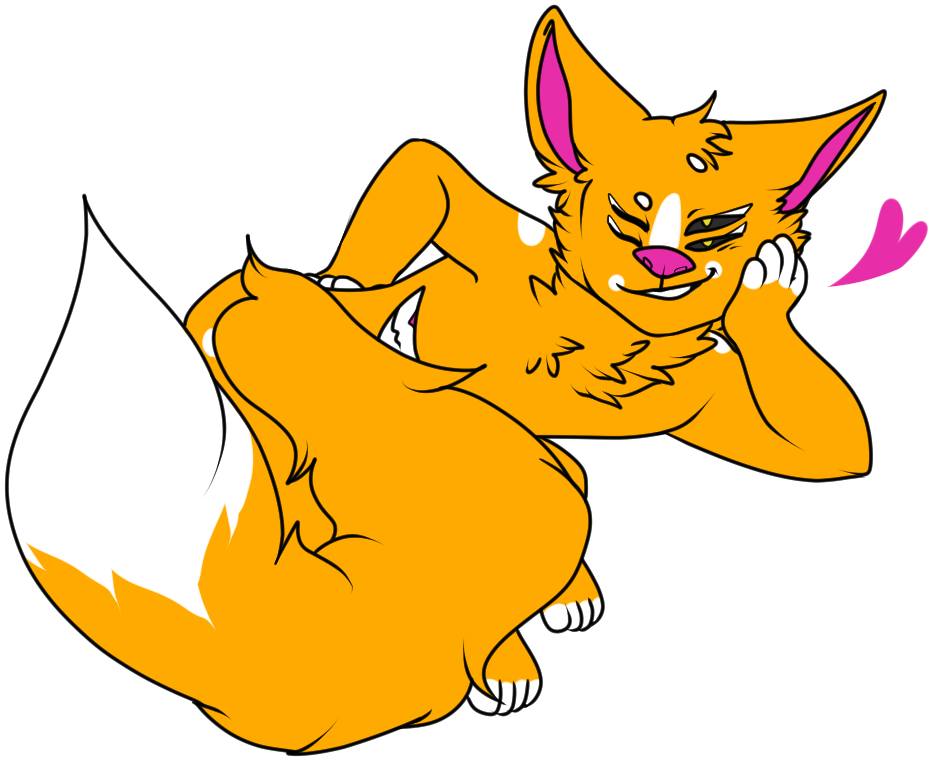 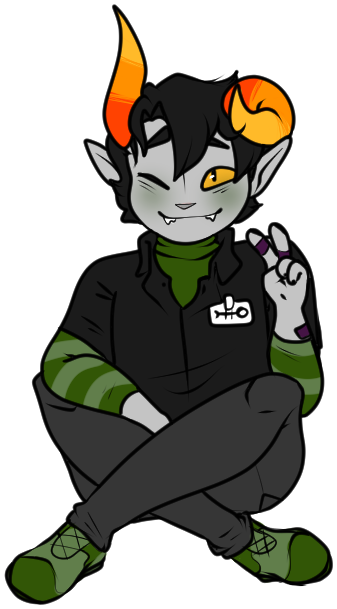 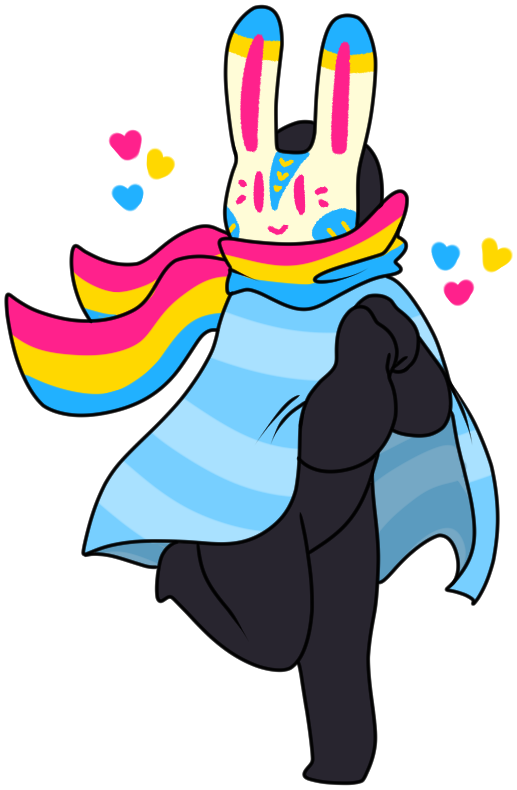