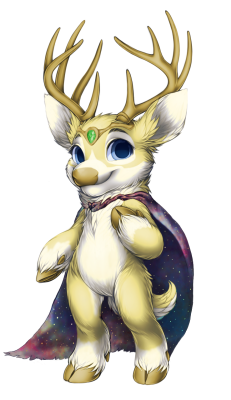 --Jar by Sukie
Connor Goldstag. Hails from a long line of honorable warriors and would really appreciate it if people would stop telling him about the legacy he needs to uphold, he is well aware of it thank you very much.
------------------------------
The Goldstags are an ancient family, with many (including themselves) claiming that their line could be traced back all the way to one of the founding members of the Order of paladins. While some doubt this claim, there is indeed evidence that that their line does go back to at least the first group of recruits the then newly-founded order had taken in. Connor's branch of the Goldstag family, consisting of his father, mother, sisters, and two uncles and their families, somehow managed to find themselves stationed in one of the Order's temples in a desert civilization near the kingdom that the Order had originally started in. The older members of the Goldstags do not run this temple, but their word is highly respected due to the family's history, as well as the experiences the paladins themselves have been through.

Connor himself is the second youngest child, and the only male child in his (nuclear) family. He's rather cocky when it comes to combat and training, and he often makes brash decisions. While he often brags about his family's history, he's actually rather stressed about living up to the legacy left behind by basically all of his ancestors. Connor and Scorpio got off to a rocky start, but after a while they began to tolerate each other and eventually became friends. Connor has a crush on Scorpio, but still hasn't come to terms with his sexuality and refuses to act on them and hides them... or, at least he thinks he does. Everyone (except some of the more oblivious people) is well aware of the fact that he is homosexual. As is expected from a population of more than one, people have very different opinions on this, ranging from his family's acceptance (and placing bets) to the temple leader's... 'extreme disapproval'. Connor also procrastinates heavily, which is part of the reason he still hasn't become a full paladin. Since he and Scorpio share the habit of procrastination, they are often paired with each other on tasks and quests. Pretty much everyone has given up trying to help them stop procrastinating.

Notes:
- Has a white horse named Seashell
- Paladins are forbidden to drink alcohol, but Connor does anyways, though it's only on very rare occasions.
- He and Scorpio eventually procrastinate so hard they become minor deities. (There's more to the story than that, but I 1) haven't figured out all the details, and 2) don't feel like writing it here.)
- The pantheon in the world tends to take in mortals who have distinguished themselves and became legends/myths. While the major gods are true deities, many minor gods were once mortals.
- Likes spicy food. His digestive system does not.
- Sometimes gets distracted by shiny things. Will always try to pet cats.
- Family is very tight knit, even though most members tend to be rather aloof. Connor has a minor rivalry with his older cousin, Melody.
- Connor's main (friendly) rivalry is with Xiraa. The Deathknight/Doomknight Kaelak is his non-friendly rival, and really wants to end him.