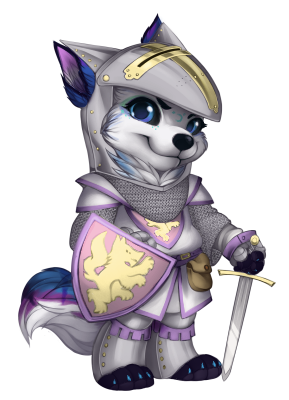 Celestine is a female Luna Tiger Wolf. She came to Quetzal Palace to be the Warrior protector because of her Dominate personality her mate Phoenix who is a female Husky moved to a different village to be their blacksmith but the two villages are great allies so this allowed Celestine to see her beloved every day when she went on a trip killing the monsters between Quetzal Palace and Tiger Eye Peak. Despite having no armour Celestine is fierce on the battlefield she will protect the village and the village's ally with such ferocity that the monsters are highly afraid of her.

Ever since one of the villages Guardian Angels fell from grace, Celestine had to get stronger to protect the village from their vengeful nature especially Major Ana and Angel. She watched Theo closely every day making sure his anger would not be turned onto the villagers and put them at a risk of getting seriously injured by his wrath. Celestine had to think up something quick to distract him from the villagers and their constant complaining for him to be banished Celestine thought Angel chose a good decision to keep him in the village but she could see Angel in danger every day, and she knew Yuki Shadowfang would not like it if her lover got hurt so she went up to Theo and proposed a deal. A deal to have a never ending competition on who can kill the most monsters here and between Tiger's Eye Peak so, for now, Celestine is containing Theo's anger and she could see that he loves to be an ass hole and show off to Angel and to try to rub it in Celestine's face that he is stronger than her in every way possible.


Since Lately after the challenge with her Eternal Rival Theo the Monsters of Quetzal Palace was getting stronger, which resulted her going in a coma after a brutal attack from one of those serpents she came across when she woke up she was told she must wear armour to protect her or her Mate Pheonix will be all alone, which made her anxious so she went to Prince Valor and asked for warriors armor fit for her, he just smiled and nodded and after another week Valor went to Celestine and presented her a Warriors armor she smiled and said thank you to him, her friends helps her in her armour, she smiled at herself feeling mighty fierce and ready to protect her village again without getting hurt so badly.

Which made, of course, Theo Jealous that she was getting so much praise, what little does Celestine know that it's Theo who is making the monsters stronger, making an effort on trying to kill her but as long Celestine is alive she is able to protect the angelic village from the Fallen Angel's wrath.

Say hello to my Celestine Terrashine ^_^ she is my warrior for my Village, she is the many fursonas.'s I have more will be coming to be added to my Village!