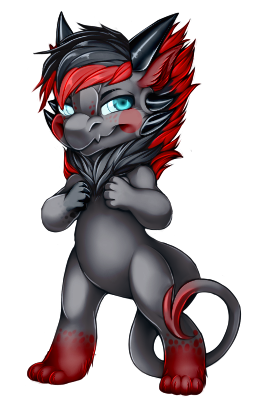 (He/him, please!)
All comments made by Reo are in-character!
Voice claim:

Aside from his appearance, Reo is very self-loathing, but loves other people a bit too much. He enjoys lots of attention and will act as catlike as he can in order to receive it.
He has two kids named Cayosin and Kaylah, both sweet little girls. His partner is a white angel dragon named Fai, who has a really weird thing for vampires.

Reo also doesn't know how to read or count past ten. He wasn't very well educated; most of the villagers simply call him "an above average intelligence cat".

He has the ability to breathe frost breath, and uses it to get his way. All the time.
He's just a brat.