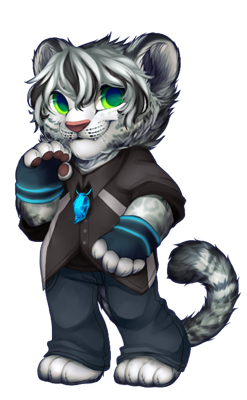 Tannyte is a bratty cub who likes to play video games, explore, and read mystery books. While he comes off as harsh, he's really very soft-hearted and sweet. He's easy to embarrass, though, and is quite prone to crying.

He is an Experiment from a project known as CellVation, where DNA is fused with items to grant the fused one powers. There are two types: Experiments, who are born through science alone, and Determinants, who were born like normal beings but altered later on.

Tannyte is created from a metal ball and chain. He possesses the power of metal manipulation, which can sometimes extend to alloys in other materials. He's a defensive fighter, although he could create weapons if he really wanted to.

He sees Albone as an older brother or father figure, and he's sworn his heart to his childhood friend, a stupid but lovable dog.