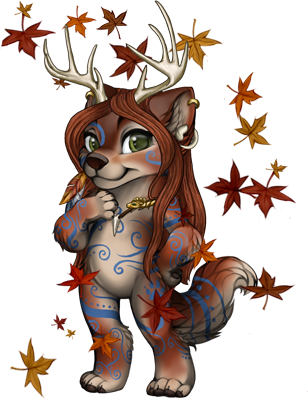 "When the Horned Hunter's call is heard, I hunt!"
~ Sharla

Abilities:
Skills: hunting, riding, animal training, leatherwork, crafts, well versed in pagan lore, skilled with a spear and bow
Powers: typical powers of a druid (shapeshifting into animals, spells of nature, wild empathy, etc) Sharla has been blessed by her god to speak to animals at will, and call the wyld hunt. She can transform others into animals along with her, and has a few more potent versions of the typical druidic spells. She can planeshift a few times a day. An exceptional tracker who can sniff down anybody nearly anywhere.


Personality: Sharla is at home both deep in the wilderness and surrounded by trophies in a hunting hall, and spends nearly an equal amount of time in both. She's mostly friendly but can seem a little distant at times. She's not very fond of civilization, although she can tolerate and live within large cities, but prefers small towns and encampments. She spends a large amount of her time in the form of other animals, particularity a wolf, deer or falcon, although she can take the form of any animal from tiny to gargantuan, as well as magical beasts.

Animals are naturally predisposed to be friendly towards her, and when not hunting she is just as happy sitting quietly in the wilderness watching the inhabitants graze and live their daily lives unhindered.

When it comes to evil you can truly see the fire burn in her green eyes. Sharla is an agent of Herne (or Cernunnos) and is happy to lead her own 'wyld hunts' to track down and destroy evil, especially if that evil is a demon or devil.

Things you don't know about me:

I was originally a cleric of Cernunnos gifted the ability to shapeshift, but later on when the energies of the world changed (ie. 3rd edition started) I re-trained myself to be a clerical druid of my god and have raised in both of these classes.
During a time where the gods were cast down to earth I served Herne/Cernunnos's wyld hunt, and later was blessed by becoming his divine agent. He has gifted me with great power which is still growing. (ie. in Pathfinder she is gestalt cleric/druid, mythic level 6, and is 24th (26th?) level)

(Her DDO version. The name 'Sharla' was taken so I have it with the double 'a'.)