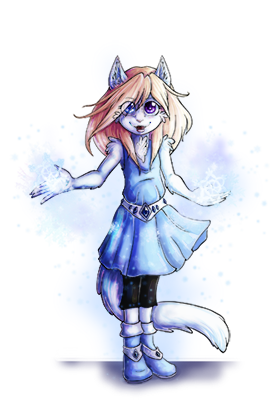 A young and frail looking cat, Perle is easily mistaken to be a young teen despite being a late teen. Having been an outcast from her family in Aluva, she struggles with the heavy fame her surname holds, and her inability to adhere to it. She was originaly condemned to be thrown between orphanedge and foster families, as her father duped her a failure. It was Eraiya who took the young child in and gave her the teaching she needed to discover and control her magic. While gratefull for all Eraiya has done for her, her frail body still remains a problem. Not being of much value in the long run has destroyed much of her confidence, but her strong spirit and determination has made her the tide turner more then once before.

Personality: Bubbly but shy, Perle is both insecure and determined by nature. Friendly, welcoming and curious, however also wary and carefull. She doesn't seek the wrong in people, but still doesn't give her full trust easy. She is very positive outwardly and will be the first to help you through a rough patch, but harbors a deeply rooted lack of self belief.

Skillset: Perle is skilled in ice magic, but paired with a very frail body she is not one for prolonged battles. Her stamina is easily depleted which puts a heavy damper on this otherwise talented young lady.

Relations:
Eraiya - Taken in by Eraiya when she was but a child, she holds a strong family type of affection towards her. When in trouble or in need of advise she will always seek her out, and even when not she is very prone to follow her example.
Toru - Constantly teased by this sly fox, she does not hold him to high in her list of "friends". While having a dislike for alot of his manners and tactics, she can't deny Toru has helped her out of a pinch more then once.
Celia - She considers Celia like a little sister, and generally spends her time playing with the young black kitten.
Iluna - Perle admires Iluna's skill, and looks up to her with admiration. But is also frightened by her stern and cold exterior.
Marrid - A casual friend, Marrid is the kind of friend Perle knows she can trust on, but doesnt really have many topics to talk about with him,
Cassandra - Cassandra's confident apearence is an inspiration to Perle, not to mention she loves Cassandra's mannerism and dress.
Nelly - Nelly is Perle's bestie through and through. 2 peas in a pod. While not being a confident person herself, Perle will always try to defend Nelly and stand up for her when needed.
Kyo - The big tall demon doesn't scare Perle, infact its quiet the opposite. Knowing full well what it's like to be an outcast, Perle feels some sort of relation to the dangerous looking man. When every one is to bussy or occupied, Perle can be found talking to Kyo about things, and even tough he generally doesnt reply with words, she apreciates his calm and patient manner while enduring her talks.
Erl - Perle doesn't know Erl to well, and generally also doesn't interact with him much.