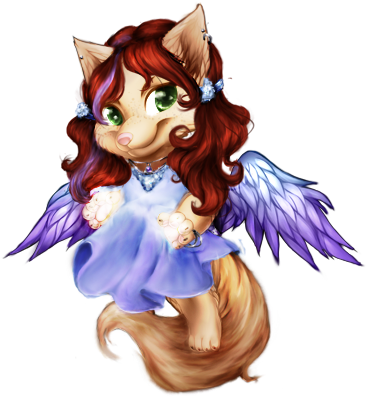 'When will you stop running on the edge of tomarrow? When will tomarrow come?'

Class:: Fighter. Commander of her house's militant troops. Chosen of the goddess of magic. Noble. Baroness of her house (co joint with her father for now)

Build: Tiny and slender. Ammelia is currently 18 but looks like she is 12 or 13. Shes 5'3" and that is about the tallest she will get. Due to her goddess, she is curvy but she does not let this get in the way of her duties and responsibilities.

Loves being 'small' and finds it an advantage over someone that is taller then her.

Species: Human but her adoptable versions have been a kind of cat or fox form^^

Abilities, Skills and Powers: She is a maser of tactics and an expert fighter who has been training since she could hold a sword. Few can outmatch her. Lightning quick and unafraid, She is usually on the front line along side her troops.

Ammelia specializes in sword and board but is able to switch up her style when needed and is also great at Claymore fighting, dual wielding, and can use a bow or gun,..though she hates using the gun and thinks its unskillful.

Being the goddess of magics' chosen, Ammelia is considered Celestial and has arcane abilities granted to her. She was born with the ability to use her radiant energy to heal and can 'see' around her (within a city's range. This is energy and emotion based. If there is a truly evil entity in the area, she can feel where they are as well as their motives) and through others (you will not get away with lying to her). Her aura is always there and makes it so others are calm around her. IF she wanted to, she could twist things to get her way. She doesn't unless there is no other choice though--that is not who she is.

One of her innate abilities is to sprout angelic wings that are identical to her goddess. This is at will.

Ammelia has abilities that are lightning, radiant, force and cold specific--the last two have been slowly growing since her ancestors--two ancient steel dragons--have shown themselves and are happily helping to unlock her innate abilities.

Since Ammelia is an emotional based entity, these abilities can be sporadic and unpredictable. She is learning to withhold her emotions to stabilize them.

A cold aura has also formed around her since her draconian heritage has been unlocked. Shes learning to control it so that she does not freeze those around her.

Flaws Noone is perfect. Ammelia is cursed with remembering every single soldier under her command that had fallen in battle. She has also gone through many countless painful phases--including having some very not nice things done against her will and dying.

She is not invincible and while she will hit a sort of overdrive when she is pushed off a cliff, there are still weaknesses that will down her. What are they? That is for you to find out! Heavens know she has [email protected]

Offspring: Due to some random fluke she has a few draconic offspring,

Status: Single though 'claimed' by her goddess.

Hobby: Gardening. Ammelia loves being surrounded by flowers. She also loves animals and taking care of others.

If Ammelia is stranded and unable to move due to an injury or other complication, she will get twitchy and want to 'play'. Her closest friends are normally at the mercy of this uppity soldier. She needs to constantly move, spar, practice and will go insane if she is unable to for some period of time.

She has been told that she has a beautiful singing voice (though shes still shy about it) and can dance gracefully--using her agility and maneuverability in battle as part of her style.

Pets?: She has 2 companions--a black tressium named Mia, and a silver Coatl named Kalaya. Both are usually within distance, and Kalaya will fight alongside her when able.

Mia tends to the 'cubs; and makes sure no one gets into trouble.

Note that her job here does not reflect the actual character. Shes doing what 'i' need right now and it will be difficult to switch her onto the right path at this time.


Ammelia is usually in her armor, but when she is not in the enclave or battlefield, she is usually in some kind of simple dress. Her goddess tends to play dollie dress up and she makes sure Ammelia is suitable to go out when she has to deal with politics.

Due to the fact that there are a few bases with armor already, I chose to draw a dress to avoid possible conflicts.

(Credit to Pookawitch for the above picture. Paintie done by me)