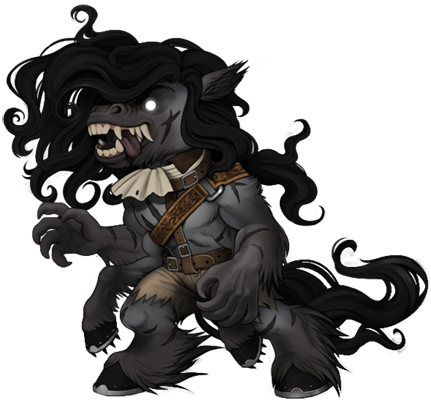 Vilhelm no longer has a house! They will be unable to work. Please replace the house or move Vilhelm into a FC slot. In his younger years, Vilhelm was a ruthless and wealthy lord of a since forgotten manor. Known for his brutal punishments and tirades he quickly became ostracized by society as a madman, driving the few surviving servants to flee. It was assumed that after many years, Vilhelm's loneliness drove him to take his own life. A mysterious fire destroyed much of the manor, it's contents pilfered by thieves. Having disappeared for decades, his is referred to as a ghost story.

Before his "death," an anonymous admirer sent to him a beautiful silver ring with an opaque white stone wrapped in fine cloth. Ever appreciative of fine jewelry, Vilhelm immediately donned the ring, unaware of the sender's ill will. It's curse transformed the lord into a horrible beast, the effects being irreversible. Blind with rage he destroyed the manor and crawled deep into the catacombs where he still lives out his now ageless life.
Curiously changed by his experience and lacking the arrogance and vanity of his previous form, Vilhelm now kills beasts, acting as a silent protector to those he used to torment.

Having heard of his strength and prowess as a warrior, Laurence sought out Vilhelm to serve under him as a fellow beast slayer. However, charmed by his presence Laurence's respect quickly turned into adoration and they became inseparable. Vilhelm's seemingly uncaring indifference towards the angel did little to deter him and thus he grew fond of his apprentice in time.