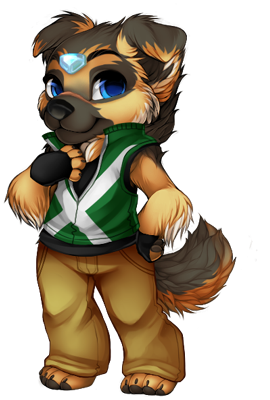 A cheerful but somewhat dimwitted dog, Prosper would do anything for his friends and family. His heart is bigger than his brain, and he tends to jump into things without thinking. He is the oldest pup out of a litter of 4, and one day wants to be a police dog.

He is a Determinant from a project known as CellVation, where DNA is fused with items to grant the fused one powers. There are two types: Experiments, who are born through science alone, and Determinants, who were born like normal beings but altered later on.

Prosper is fused with a lonsdaleite, granting him the powers to manipulate both the earth and various stones. He can create items for help in battle, such as a temporary barrier, or just small everyday knick-knacks. He likes to do both.

His heart belongs to his bratty but sweet childhood friend, Tannyte.