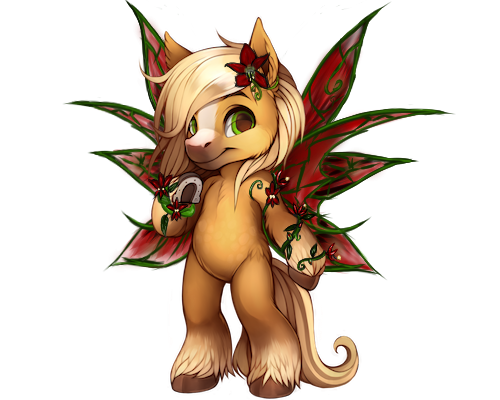 Amaryllis no longer has a house! They will be unable to work. Please replace the house or move Amaryllis into a FC slot.

(wip. progress : finishing up relations. cleaning up profile.)
-Small Notice: Although this character has two different accepted pronouns, I use only she/her for the simplicity of those who have difficulties reading/pronouncing neopronouns, especially for those with learning or speech disorders. Both given pronouns are correct.-
'In ancient Quetzalan myths, the amaryllis flower is thought to have been a unique, one of a kind flower. Ha, that says a lot about me, doesn't it?'
Name: Amaryllis Herb
Age: 23 (in human years.)
Description: A palomino horse flower fairy with a pair of red and green wings, adorned with flowers. She is 5"8. Amaryllis identifies as female, using she/her and fae/faer/faerself pronouns. She is asexual and panromantic.
Personality: Amaryllis is first and foremost, prideful. She is greatly self-confident and perceives herself to be the most beautiful fairy in all of Furvilla. Amaryllis takes pride in her work as a herbalist and spends most of her time performing her work. Most of her other free time is spent on the couch watching her favorite television or playing dress-up. Amaryllis is bratty and self-absorbed, and only does her work because she enjoys it rather than it being her duty to. She believes in free will, but mostly because it's convenient to her. Her opinion of outsiders is not high, and she has distaste for the few townsfolk that come from outside Quetzal Palace. Although she is immature and loud-mouthed, she's incredibly hardworking at her job and keeps primarily to herself. Despite being a fairy she has a tendency to blackmail and bribe others to do what she desires, and has no qualms about manipulating others to suit her needs.
Background: Amaryllis is one of the fabled Flower Fairies, whom are only born on Spring Equinox. Such flower fairies are capable of magic derived from plants, and focus their powers on healing and growing plants, including crops. It is Amaryllis' duty to harbor the plant life of Quetzal Palace. Though flower fairies are typically born as adults (by the standards of standard Furvillians) many that reside near civilians have taken upon standard ages to describe how long they've lived for. Flower fairies do not traditionally have relatives, but in modern times many fairies will associate those they grow up with as family. In addition, flower fairies do not traditionally have assigned genders. Many fairies identify with one, but most are agender. Lastly, flower fairies are not capable of sexual attraction. Amaryllis is specifically a red amaryllis fairy, making her presence in her village spread love, beauty and luck, but also potentially toxic.
Amaryllis has lived in Quetzal Palace her entire life. For a vast majority of her lifetime she has been sheltered and spoiled by her big sister Allium, contributing to her selfish mindset. Amaryllis' magic is quite excellent for her age and her skill has contributed to incredibly haughty personality. She's never traveled away from Quetzal Palace, and rarely visits other towns within QP, giving her a slight xenophobic tint to her beliefs.
Relations
Allium - Although they are not blood related (as flower fairies do not have relatives in the traditional sense), they treat each other as sisters and always have each other's back. Allium frequently finds herself needing to clean up some of the problems Amaryllis causes by running her mouth, but in return, Amaryllis does most of the herbalist work. Allium is the older sister, and thus often protects Amaryllis from harm and has sheltered her a majority of her life. Though the two differ in personality, they care deeply for each other. Amaryllis thinks highly of Allium, whom is the only person she believes belongs at the top with her.
Adobe - Amaryllis dislikes Adobe due to them not being a native to Quetzal Palace, though besides when they first met, Amaryllis has not voiced any dismay to them specifically. Amaryllis talks quite badly of Adobe behind their back, often forcing others to step in and calm her before she gets into trouble.