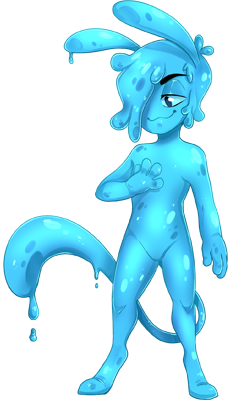 Created in a lab by a scientist named Nathaniel, and imprisoned in a containment chamber by him, Berry lazes his days away in solitude, the only interaction or amusement he gets is when he lures hapless scientists, employed at the lab, into his cell. One scientist in particular has been deemed his favourite, an eager and obnoxious genius by the name of Ripley.

Ripley disregards the rules Nathaniel put in place to keep scientists out of Berry's grasp, often sneaking in to meet his favourite slime creature, or waiting to raise the alarm if Berry somehow managed to escape his containment, More often then not, Berry ends up in Ripley's office or his lab because his chances of escaping the building the labs are housed within are slim, even to an escape artist like him.