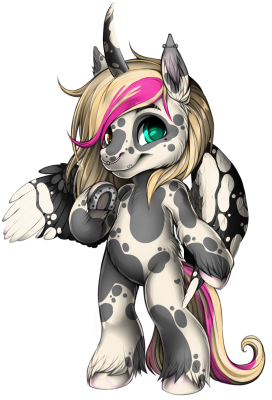 Louie is an excitable, fun-loving trans boy. What he lacks in courage he makes up for in enthusiasm. He's initially pretty shy, but he warms up quickly and loves making friends.

He has an interest in body modifications and tattoos and hopes to become a piercer and tattoo artist one day. He also has a knack for animal husbandry, but considers that more of a hobby.

His own body modifications include his fake horn, his contacts (one yellow and one green), his colored hair, his chin, nose, and ear piecings, He is a pegasus though.

They are prescription contacts though. He wears glasses when he doesn't have them in.

Update: He's able to open up a new shop and has done the bubble tattoos on Bubblegum Wishes
He has a new love in his life, his pet snake Milhissa.