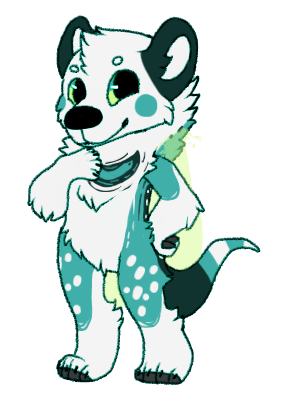 Drawn and designed by Solminol ^

Spotty is one of my characters!! He is a Pallio which is a species made by Solminol!!

He's a shy guy who owns a farm on another planet called, "Usmore." That's a planet I made up. :D The fellow people on that planet help him with his farm!! He also tends to whisper (hearable whispers) things just because he's a fluffy shy sparkledog. (Stole that idea from Timmy from Animal Crossing.) He is actually genderless but prefers to be called a boy. His pronouns are he/him or they/them. Use whichever floats your boat!!

Note for I: Make his gosh darn character page and link it here.

Got rejected so I "turned" him into a wolf. (I actually just got rid of the previous villager and got a wolf one...shhh...)