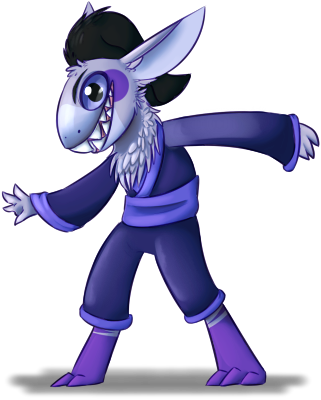 (she/her)
All comments made by Tsukiko are in-character!
Tsukiko Kobayashi: Roughly translating to "Small Moon Child".

A young thief with origins seemingly from Japan. Most of her motives are unknown, though she does seem to enjoy thievery and fighting just for the thrill.

Formerly a disciple of Yuudai, she broke away from their command and decided to be her own villain, stealing money and trinkets simply for her own pleasure. She isn’t trying to obtain revenge for her terrible treatment in the past– she’s just evil because she wants to be.

When someone gets to know her, they find that she’s actually very nice, so long as they’re on her good side. She tends to backstab people, both literally and metaphorically, so she ends up not being a very trustworthy person.

She is in a student relationship with Ayla, taking lessons from the lion.. Neither of them are interested in romance, but they do stay around each other and relax to get to know each other better.

Tsukiko is a futakuchi-onna, meaning she is the two-mouthed woman. Her normal mouth is always grinning toothily, and her second one makes up her “ponytail”. She eats a lot because of this.