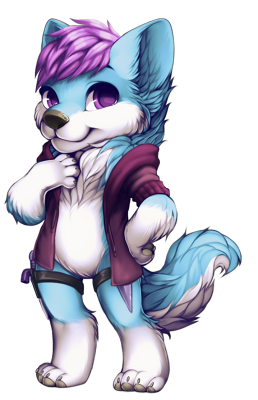 "What's the point of having friends if you can't protect them?"

-Male Wolf-
Age: 20
Occupation: Medic (Doctor)/ Guardian (Warrior)
Personality: Shy | sweet | kind | loyal
Likes: Music, daggers, protecting others~
Dislikes: Being the center of attention, gore, snakes (Has debilitating fear of them)
-Would sacrifice self for others

Aura was quite a lonely pup when he was younger. He has no memories of his parents, so for all he knows, they could dead.
Aura was always picked on in school, and didn't have the power to stand up to them. However, one feline girl was kind to Aura, and always looked forward to spending time with him. They became the best of friends over time, eventually making Aura feel...lovestruck? It was a feeling that he has never felt before, and he wanted to confess how he felt about her...alas, he was never able to...
One Sunday evening, they traveled to the outskirts of their town to a vast, beautiful meadow. The two spent hours laying in the grass, staring into the sky and laughing at jokes, until suddenly, they heard rustling in the distance. The feline said that they would investigate the source of the sound. Moments later, a large snake, presumably an anaconda, lunged directly towards the girl. Startled, she jumped away, but at the cost of tripping herself. The snake easily managed to catch up to her, crawling up her leg, wrapping around her chest, beginning to constrict her. She screamed for help as loud as she could, until the serpent tied around her neck. Suffering, the girl reached her hand out towards Aura, who was left dumbfounded at the ordeal and unable to move, only able to watch the deathly experience she was going through. Finally, a few adults came down from the town and witnessed what was unfolding, and rushed down to slash the head off the colossal snake. However, by the time feline was freed, she was already a lifeless corpse.
The men who slayed the snake gazed down upon Aura, who was still paralyzed in fear. Their eyes were filled with anger and disappointment. "This pathetic bitch let her die" one said. "Just leave him, who cares?" another said. As time passed, Aura was able to regain his sanity and walk his way back to town. The villagers quickly heard word about what happened in the meadow, and Aura was shunned away by everyone. Nobody would take him in. Nobody would help him. Aura had no family. He was deemed an outcast, and was kicked out of the town, unable to ever return. The young wolf had no other option but to venture into vast forest surrounding the town, alone and frightened. Aura traveled about a mile away from the village before he encounter a large husky with a rather serious expression, and was covered with battle scars from his head down. He noticed how weak the pup looked, and took him in as his student, training him how to fight. Aura really took a shine to his dagger play, and decided to train with him in that field.
After 4 years of intense training, at the age of 15, his sensei let him go, as there was nothing more he had left to teach him. Aura was ready to risk his life for anyone. Even now, he is no longer afraid of death.