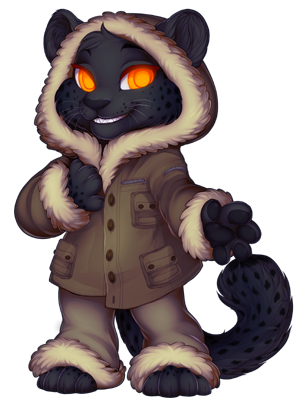 Always with a cocky grin, Ekkon is constantly causing trouble. He loves to piss others off and cause fights, and has close to no moral code. He has a lot of attitude and big mouth, but unfortunately has the power to back it up. Ekkon takes nothing seriously, and everything is a game to him.

He is a special Experiment from a project known as CellVation, where DNA is fused with items to grant the fused one powers. He is a Black Fuse Experiment, created from dark ore. He lacks certain emotions, such as pity/guilt, empathy, fear, sadness, etc.

Created from a xerox printer and copier, Ekkon's powers rely on illusion. His blood courses with ink, which stain his fur to give the appearance of freckles and spots. He is able to use this ink (CMYK/BW) to alter the world around him via illusions along with palpable changes, or cause poisoning.

He can clone himself, copy others' appearances, dissolve into ink, create a smokescreen, and his body emits a signal-jamming wave. Supposedly, he has more powers that are still undiscovered.

He doesn't really "get along" with any of the other CVs, but likes to bother them anyway. For whatever reason, be it a superiority or (creepily) “affectionate” thing, he has an unusual fondness for bizarre nicknames— he gives one (or more) to practically everyone.