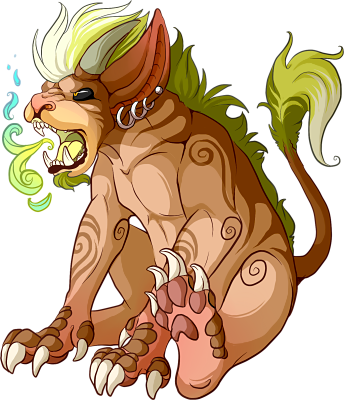 4 SALE no longer has a house! They will be unable to work. Please replace the house or move 4 SALE into a FC slot.

Kha isn't one for a whole lot of words; usually taking the position of listener...and he's content in that. He's an open-minded individual who doesn't ever really have a strong opinion one way or another since he sees the 'point' in just about everything; right or wrong.

However, he wasn't always this way, nor did he always look this way.
Growing up, he was your average and...rather handsome young male. Though despite his glorious appearance, his personality was simply hideous. He always seemed to have a superiority complex and his ego was high up in the clouds. He would openly criticize others about their appearances and pretty much thought he was a god among mortals at one point.

One day, he belittled an older woman for the way she walked with a crooked limp and began poking his usual fun. However, this older woman was no mere little old grandma...nono...this woman was a sorceress, a witch as many called her. Deciding that Kha needed to learn a thing or two, she only had these words to say:
"Appearance is the only thing you care for; but outward beauty accounts for nothing if the core is rotten."
And with that, she left him behind to continue his laughing with her own grin forming underneath her coat.

Days later, Khaan had noticed his face slowly changing...his nose deforming...his ears steadily growing longer...rough patches scaling over his feet...and it only seemed to worsen day by day. Doctors couldn't explain it and many began poking fun at him as an act of revenge. After a full year, his transformation had stopped...but he could no longer bear to look at himself in the mirror.

His outward appearance now matched his 'core'...and he was miserable. Though in this new hell, his eyes had been opened to how he had treated others through his words alone. THIS is what he looked like to them all along, wasn't it? Vowing to change his ways, he began honing his skills and landed himself a job as the local blacksmith...in training.

However, with Olde Foxbury being overrun by waves of monsters each night, making and forging weapons for the strong was one thing...but actively doing something about it was another. He wanted to become stronger, strong enough to protect his town and help out the innocent.

It wasn't until Hart's little crew arrived in the town to stay for a few months that his dream became a reality. Though he was also a male of few words, Miko took an interest in the oddity and agreed to train him in the ways of fire so long as Khaan vowed his allegiance to their group leader; Hart.
Agreeing to this condition, Khaan became the 10th member to join the snow leopard's traveling crew, and in turn, honed his skills and learned the ways of hell's flames.

Sometime during his training, he figured out his own methods and styles of fighting and honed the 'beast' skill. Allowing his body to completely morph, he is able to double his fire abilities' strength, though his beast form takes a great deal of energy to use. He only uses it when it's absolutely necessary; the longer he stays in this form, the weaker his conscious mind becomes. Once he reaches his limit, if he does not allow himself to change back to his 'human' form, he essentially loses his mind and becomes nothing more than a destructive beast or terror; a total feral mind. The only thing that can stop him when he's in such a state is Miko himself and his energy draining technique: "Hellfire submission".