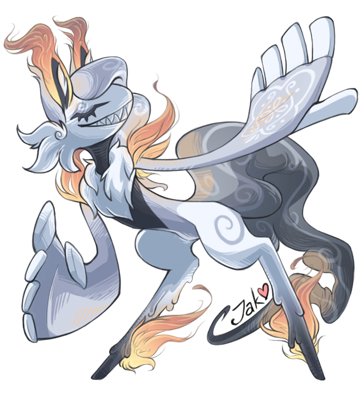 Color: Candle in the Window


A soft-spoken and gentle Scarfox, Noemi sees the best in others and is more than willing to lend a shoulder or ear to those in need of comfort. She takes pride in being a good listener and often finds herself surrounded by friends and acquaintances due to her kind and caring nature. She's an ambivert, though at times she can be slightly introverted if social interactions become too strenuous or demanding. A girl needs time to herself, after all!

Though she is quick to see the best in others and encourage them in their goals and dreams, Noemi seems to think very little of herself. She receives a lot of compliments from friends, family, and others, but these compliments are met with awkward laughs or sheepish replies. She calls herself modest or humble, but in reality, one would almost say it's bordering on self-depreciation.

When taking time to herself, Noemi enjoys spending time at her dance studio, practicing her routines and honing her powers. As noted by the smoky tail and flames that dance from her body, she's a fire element Scarfox. Her flames are warm, hot enough to soothe and comfort but not enough to burn. While she dances, her focus deepens and often times she summons flames from her hands unconsciously which trail her motions like flowing, ribbons. It would be a spectacular display if someone were around to witness it at the time.

In addition to her fire magic, Noemi has the ability to manipulate glass and shape it to her will. This process is difficult for her and uses a lot of energy, so it's not something she does often. Her choice of manipulation varies in size, but always takes the same shape: a glass orb with swirling flames inside of it. Sometimes she creates multiple orbs that compare in size with a common marble, other times the orb may compare in size to a baseball. She has her own personal orb which she carries around in her bag, but the other orbs she makes are often given to others as a comfort item when they're going through a rough time in their lives. The orbs are warm to the touch and emit a soft light very similar to a candle's flame.

Though Noemi loves her friends and cherishes the time spent with them, she admits that she's truly happiest when she's dancing because it gives her a sense of freedom and escape. She doesn't like to see others upset or suffering and wants to help as much as she can, but constantly having people unload their feelings on her can weigh her down emotionally too. Her dances, especially when accompanied by her fire magic, give her the sensation of burning away all of the negativity and starting anew.

Scarfox closed species created by Kakiwa. Please do not make your own.