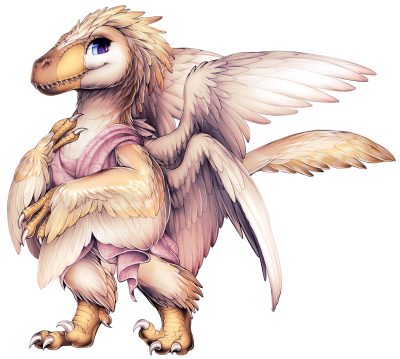 A gay raptor. Wishes Arpeggio would like him back. Was living in an actual nest made out of silk scarves, built in one of the petrified trees in the higher mountains around TigerEye, as is fitting for a seraph. But one day he happened to fly over an exploring land raptor, and was so struck by his beauty he nearly fell out of the sky. After a little research, he was able to move in next to Arpeggio.
Or at least that's what he'd tell you.
The real story is a little different.
Valence was born a red fox named Charlie in a poor village on a plateau. He spent hours staring at the sky, dreaming of a way out of his current life. When he was ten, the reptilian seraphim that terrorized his region came around, demanding their decennial sacrifice, a mammalian child. Charlie volunteered before anyone could stop him, kneeling on the ground at the lead seraph's feet.
"Please," He begged them, "Take me." The multi-winged raptor smiled, holding out a talon to the kit. Charlie took it, and was whisked away, taken from his home forever.
In the clouds, the seraphim raised him, not as their child but as a kind of pet. A jewelled platinum manacle around his neck, they had their way with him for years. Any attempt at escape was punished harshly. Charlie had wished for the sky, but he had never wanted this. His salvation came when he was nearly an adult, in the form of a platoon of Quetzal Palace soldiers, cleaning up their region. He was set free, released on the ground in the snowy wilderness outside TigerEye Peak, and left without supplies. He stumbled into town weeks later. He was a sight, ragged, fur stained with blood. Totem treated him, and sent him Kriska's way when he was recovered, knowing she had just prepared another cabin for occupation. The fox who arrived at their property introduced himself as Valence. He was not expecting to stay. The Quetzal Palace Serpent Festival was on, and he had been hoping to get in on that. But when a box arrived at his door containing a small, strangely glittering plush toy, everything changed. Upon touching it, he became one of the creatures that had owned him for a decade, a seraphic velociraptor. It was odd, he thought, that he didn't feel bad. Rather, he felt wonderful! He could fly, like he had always wanted. The shy, reserved red fox was no more, as Valence gained a sense of confidence and self-assurance. Since then, he has lived, flirting shamelessly with Arpeggio at every chance he gets, never settling on one job to do. He's happy. And that's what really matters.