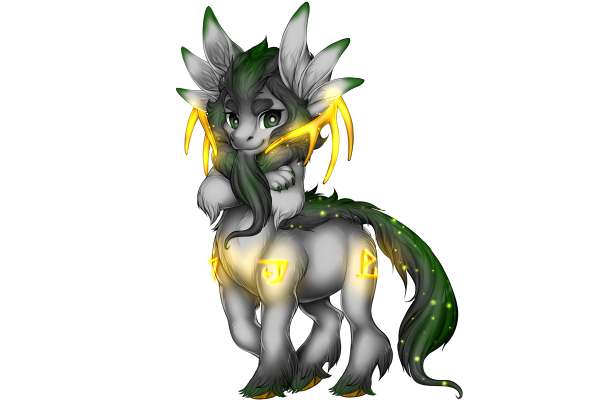 Eventhough Ulfraan is genderless, the residents of FurVilla always reffer them as "he".

When Herbalists and Animal Husbandrians get a chance of seeing Ulfraan while they are collecting animals or harvesting their crops, it is a good sign that the harvest will succeed and the collected animal will be a super rare.

"Look deep into nature, and then you will understand everything better."

~Short Story~
Takumi's harvest failed. Again. How is he going to pay for repairing his house and pots when he can't even make enough money selling his crops. He once went out in the woods and tried to collect seeds by himself, since he can't afford buying them from Explorers. Unexperienced as the Young Stallion was, he got lost in the Woods.
Soon after, he found a large place which had a beauftiful waterfall and a giant lake. Also there were lots and lots of animals in all colors and shapes. Takumi was stunned as he saw this place, he felt so ... peaceful. "Seems like we have a visitor.", he heard someone say. As the Young stallion turned around, he saw the god of nature - Ulfraan Mi-Skraan, as the other villagers called him. Takumi didn't know what to say but instead the god spoke: "You got lost, it seems. What are you searching for?" "I-I was l-looking for some seeds ... I can't really afford buying them anymore because all of my harvesting attempts failed in the last few months...", the Young stallion said with his head down. "Hmm... You can take these seeds from me. Also, take this with you.", Ulfraan said handing Takumi a hand full of seeds and a special necklace. "As long as you wear this necklace, your harvest shall never fail. Accept it as a gift from me, Herbalist Takumi.", the god said, smiling. Takumi stood there with seeds in his hands and the jewelery around his neck. He said: "Thank you, Ulfraan! I .. I don't know how I should thank you for this..." The god laughed a bit and then spoke "Just go home and plant the seeds. You will find the path to your house much easier now than before."
And with that, the Young stallion walked off with a big smile on his face. He will never tell anyone about his encounter with the god of nature ... It will be his little secret.