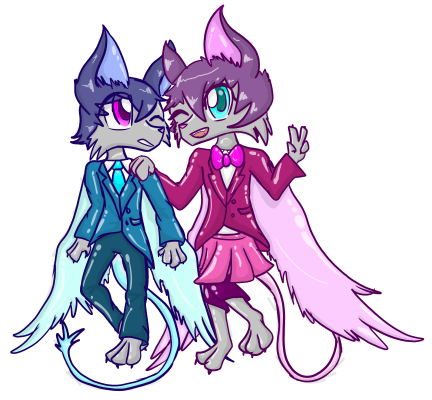 Tory and Terri has fallen ill with Coral Madness. Number of explorations per hour is halved. This illness can be cured with Salty Sedative.

Contrary to their appearance, both Tory and Terri are fire elementals. Born on the frozen cliffs, their inner fire energy allowed them to keep warm with relatively thin fur and clothes. On top of that, they spent most of their days in the village indoors, sheltered from the freezing outside temperatures.

Tory tends to get annoyed by his sister's immature behavior, while Terri wishes her brother would actually enjoy life a little, but the two love each other very much. They're almost never seen apart from each other, even if they don't have much interest in what the other one is doing.

Despite having wings, neither Tory nor Terri are capable of flight. Rather than being made for aviation, their wings are covered mostly in fine, soft down feathers, and are extremely flexible. In case of a storm or otherwise harsh conditions, they can wrap their wings around them to serve as a sort of coat.