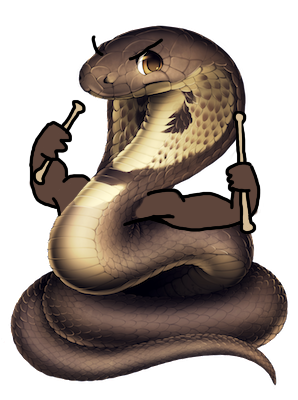 Lars is an ancient rinkhals with no last name, because his mother was a black hole, thus making his birth the first time a being has escaped from one. He's made of antimatter and potato chips, and he has a brain in each of his biceps.

Once a vagabond, he stole arms from Trogdor and the S-is-for-sucks dragon to play drums with. Sadly, his drum playing will never regrow the hair he lost when he got fired from being Quetzalcoatl.

He'll play any song, badly, for a sammich. Lars is addicted to sammiches.

ULTRA RARE PHOTO OF A YOUNG LARS BEFORE HE LOST HIS HAIR:

DON'T TREAD ON HIM

((Lars was a passing wanderer I adopted and gave a paintie. Thanks anonymous FV user for giving him an inspirational name!))