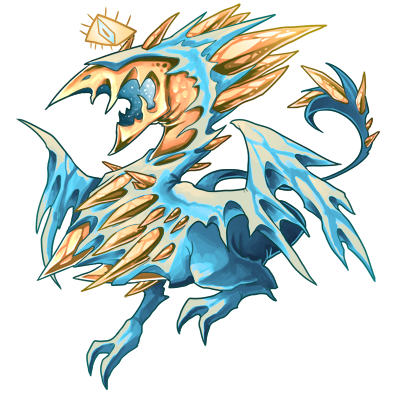 Romuco was once a more conventional angel. For centuries they served their Goddess faithfully and without question, enjoying life among the heavens and destroying demons if they ever strayed too far from their infernal realm.

And yet, as fate would have it, they were struck down in a foul way--ambushed, they were killed by forces unknown, but likely demonic in nature.

Because of this, they died with their duty feeling undone; shadows of regrets haunted their dying breath. It was not only its own regrets though, as their Goddess also felt a great despair. And so, with both such strong spirits plagued by pain and sorrow, the angel was split apart.

What remains of this angel are two living pieces, neither whole. Romuco is the husk that withholds the angel's prowess and skill in battle. Its memories are within another being elsewhere, yet to be found. Without being aware, they are avidly searching for one another to find peace.

Romuco, being only a beast of power, has no memories of their previous self. For years, they wandered, mindlessly striking down any who would oppose them or defile shrines. However, upon making it back to humanity/civilization, they have begun to grow a conscious once more.

Romuco now has given itself a name, and has begun to find purpose in its life. As the angel before it, it is incapable of telling lies or willfully harming humanity and creatures of the natural order. It has turned to protecting them once more, and is building new memories of its own. And yet, it still is unable to find the words to truly express itself, and hopes one day to fill the hole in their heart.

As for most of their existence Romuco knew only violence and how to attack, they are extremely adept at fighting, using quite a few tricks and manipulating holy magic in devastating ways. By frostfur go love her -Other notes:
*Has a tendency to squawk

<Paintie by Pesticide , you can find her wonderful artwork here!>