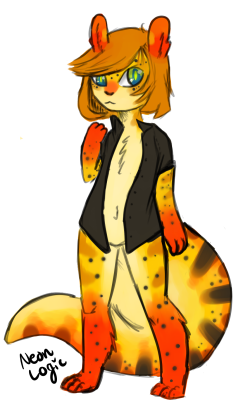 Auburn is infected with Lycanthropy. Changes into a beastly monster after exposure to moonlight or especially frustrating board games. Howling at the moon relieves the symptoms for a little while, but use a Golden Apple for best results.

Auburn is probably a bit too energetic and outgoing for her own good. She loves to chatter on about the things she likes, which is an uncommon mix of interests. Her parents raised her such that she was allowed her to pursue anything she was passionate about, within reason. Rock music and romance novels, fighting games and painting cute critters, Auburn has yet to find someone who has enough common interests to keep up with her.

She tries to be picky about who she dates, but so far none of the guys or girls she's dated have quite "clicked" with her. Auburn's become used to having to do some things on her own due to her eclectic tastes. Her friends always help her through the low times, so she keeps up a bubbly optimistic demeanor. What she tries to keep from them though, is her temper. Auburn has a bit of a short fuse, but tends to seethe silently, and wait until she's alone at home or at least somewhere private to finally blow up about it.

She currently works as a glassblower's apprentice. It isn't ideal, but at least it is a more secure living than selling her paintings, and more creative than most other jobs. Auburn dedicates herself to her work, because once she gains a foothold and gets her own business off the ground, she may finally have a chance to spend more time on her art, and maybe sell some alongside her glasswork business.

Some find it odd that a creative spirit like herself dresses so plainly, but she would really rather let her natural charms speak for themselves.

Art below by Ender