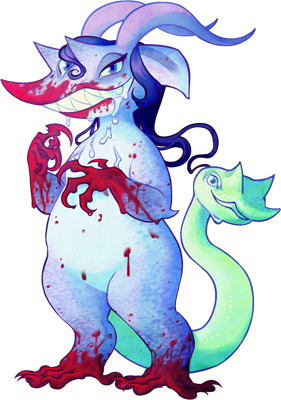 Echidna no longer has a house! They will be unable to work. Please replace the house or move Echidna into a FC slot.

" Then Ceto bore another invincible monster, in no way like mortal men or the deathless gods; yes, in a hollow cave she bore Echidna, divine and iron-hearted, half fair-cheeked and bright-eyed nymph and half huge and monstrous snake inside the holy earth, a snake that strikes swiftly and feeds on living flesh..."

" ...the goddess fierce Echidna who is half a nymph with glancing eyes and fair cheeks, and half again a huge snake, great and awful, with speckled skin, eating raw flesh beneath the secret parts of the holy earth. And there she has a cave deep down under a hollow rock far from the deathless gods and mortal men. There, then, did the gods appoint her a glorious house to dwell in: and she keeps guard in Arima beneath the earth, grim Echidna, a nymph who dies not nor grows old all her days."
" Neither earth nor ocean produces a creature as savage and monstrous as woman." - Euripides

Echidna is an immortal she-viper who revels in gore and glory. She is hedonistic, chaotic, and selfish beyond measure - what Echidna wants, she gets, even if she has to pry it from someone else's cold, dead hands. This makes her quite the loner, though she does from time to time deem other creatures worthy enough to stay by her side as a mate. Unfortunately for her partners Echidna gets bored rather easily and every mortal being she's paired with has eventually ended up on the dinner menu. It's just a matter of time before her current paramour is next.. because to Echidna, everyone is expendable.

Until she met Zack. Zack Caligat seems to be indestructible, and the ferret is otherwise undaunted by her monstrous nature. In fact, he apparently finds her quite charming. For now Echidna keeps him around - if only because he'll gladly do all the dirty work in her stead to sate her appetite for blood and flesh. The arrangement works rather well for her and she's made no effort to rend him limb from limb in days. As much as she'd hate to admit it, Zack's puppy-like obedience and willingness to please her have endeared him to Echidna.

One of my fursonas, created for a convention with B movie horror and sci fi movies as its theme - though I also made her at the time to work through a lot of horrible feelings. She's a really good character for catharsis.

Echidna's the fursona who's least like me, and more what I sometimes need (and want) to be. Sometimes I need to feel powerful, and mean, and like nobody in the world except me matters, and I think that's helped some. When it comes to what happened to me, my feelings on the matter are the most important - and anyone who disagrees can fight me.

All art, coding, and painties are my own creation unless otherwise stated.
Do not use or copy without my express permission.