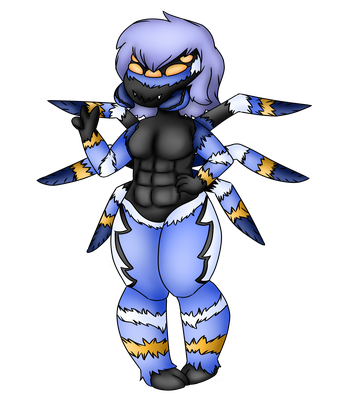 Tillite Nightsky is infected with Vampirism. Symptoms include craving blood, sensitivity to sunlight, an allergy to garlic, and changing into a bat after especially forceful sneezes. If they start to sparkle, immediately consume a Golden Apple to cure the infection.


Hes very small in size compared to other creatures, hes only 3 feet 0 inches. Hes known for being very flirty and sneaky, he makes almost no noise when he moves around. He likes building things so he works with construction, architecture and doll making. He uses his web to make his job easier. Hes gay however he flirts with practically anyone, not only other men. He has more of an aesthetic attraction towards Women, not a sexual or romantic attraction. Hes very fluffy and the paws on his feet are squishy. He has claws on his hands but his palms are also very squishy. He never washes or brushes his hair so its messy and oily, which actually makes his hair healthier. He does wash it with normal water though, he just doesent like soap..... He doesent like any beauty products.
He had a wife once but she got on his nerves... So he ate her. She was a female rabbit who he got together with when he was a teenager. She was a bit too clingy, annoying and bossy for his taste. He also had no attraction towards her, he didnt even find her aesthetically pretty.
His favourite food is a bit... Out of the normal, as he absolutely loves to eat spider minipets, maybe thats considered cannibalism? Just never give him a minipet, you never know if hes going to eat it or not.