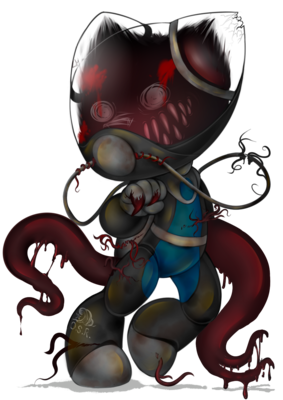 Soth is infected with Lycanthropy. Changes into a beastly monster after exposure to moonlight or especially frustrating board games. Howling at the moon relieves the symptoms for a little while, but use a Golden Apple for best results.

After an hour ties and communication were lost and as the clock ticked by, hope for them grew less and less for them surviving the icy void of the ocean's depths.

After months of searching the diver's body was found.
It was nothing like they had ever seen, like something out of a horror movie.

Tendrils spilled out of openings in their suit, A fairly large one totally replacing half of their left arm, still writhing after being plucked from the water.

Head seemingly replaced by the void of the deep itself. featureless aside from large sharp teeth and what could be thought of as "Eyes"

Thought dead, the "Diver" sharply sat up, "eyes" seeming to look past everything and everyone that came to study the body.

Maybe the rumors were true about the "Bloop" but after what happen to the lone diver, No one was willing to take a chance find out again.


Sooo story is based somewhat on the bloop. Which in the Cthulhu Mythos the Bloop was located a mere 1,760km from the location of the sunken city of R'yleh.

Which our poor diver here came across and was turned into an eldritch horror.

His name means 'Void' in R'Lyehian, His original name is lost to him.

Before his change he was a gray and white wolf-dog with one solid white ear and bright green eyes.

O.S.R./Ocean specimen retrieval, his place of bushiness that sent him to his downfall.....Their logo has the elder sign in it so they knew what they were doing....but it failed.