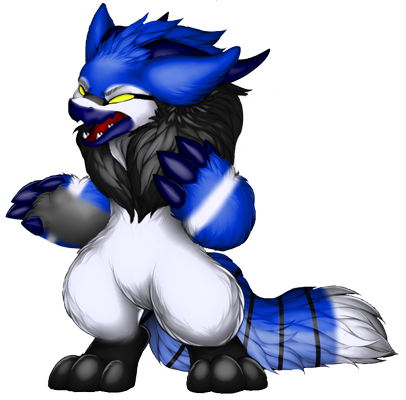 Dani no longer has a house! They will be unable to work. Please replace the house or move Dani into a FC slot.

Despite their frightening appearance, Dani is actually a very kind soul. They only ever get vicious with the monsters of Dragonsmaw, and for a good reason, as they are the main defender of the land around them.

Dani was transformed into a Wickerbeast at a very young age, meaning they've had plenty of time to adjust and overcome their... less favorable attributes. Like the rage and bloodlust. Terrible things, really. They found it only fitting that they become a warrior-a defender, one to do good AND relieve that nagging need to kill and maim!

Dani was found one day by Doctor Tinsel, as they wandered the woods around Dragonsmaw. The good doctor, of course, couldn't bear to see a soul all alone, and invited the huge beast to live with her, in a developing territory at the southern end of Dragonsmaw. Dani, though excited, was worried-they had been keeping their rage under control with the slaughter of monsters, but had still kept far away from other villagers. They were worried-what if they couldn't control themselves?
The doctor was having none of it and assured Dani against their fears, telling them they could put their talents to use keeping their territory safe! Dani finally agreed to go back with her-there was no convincing her otherwise. They live with the doctor now, and at night go hunting for the beasts crawling in the woods.

{Any interactions will be responded to in-character!"}