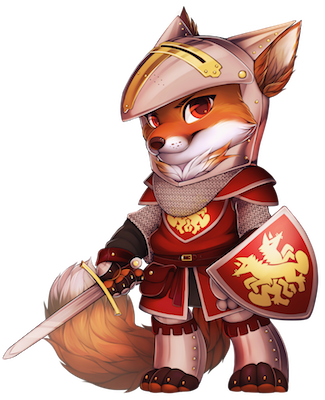 Avis is infected with Lycanthropy. Changes into a beastly monster after exposure to moonlight or especially frustrating board games. Howling at the moon relieves the symptoms for a little while, but use a Golden Apple for best results.

The armored fox sat idly under a tree, eyes closed. You approach cautiously, unsure whether or not they notice you until they speak, "So, did Caimar send you to mock me or kill me?" They open their eyes and glare coldly at you, emotionless, but after a moment just turn away and sigh, "No, sorry. I shouldn't assume things so quickly. I... I have trouble trusting other folks, see?" They sighs again, "Anyhow, I'm not much for conversation so you're best moving off to Kali or the like. If it's a fight you want though..."


Avis is an assassin, or was one, until their master recently found out about their past dealings with a group of wandering heroes a long, long time ago. Now in another group mirroring the old, they guard their companions against whatever terrors come their way, despite not necessarily being welcome by all of them, especially Caimar. Not that they blame him though, they did try to kill everyone at one point or another...
Avis comes off as very distant to friends and strangers alike, due to a past betrayal that left them crippled physically and emotionally. Despite that, they are actually very kind-hearted, and would do anything for someone they are friends with... except let their guard down.


Someday... someday I will make a paintie for them... someday...