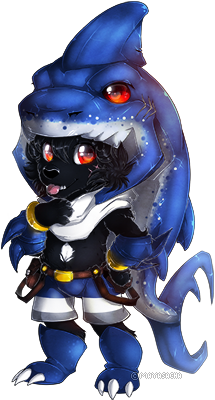 **NEED TO CHANGE PAINTIE DUE TO PERSONAL DESIGN EDITS~**

.: Ralok | Male ♂ | Leo ♌ | Straight :.
Name: Ralok ArlGodrage
Nicknames: Sharkboy or Ral
Tribe title: Ironchewer
Race: Woavvoof
Age: Immortal/Ageless
Birthday: July 27th
Quick physical traits: Tall, muscular and might seem chubby at the belt/belly area
Deity: Jygmöria - Zakliwr
~~~~~~~~~~~~~~~~~~~~~~~~~~~~~~~~~~~~~
Ralok is a chubby gentle giant.
You can call him Sharkboy. ♪
His actual specie is "Woavvoof", a personal specie of mine, but I consider him canine like without being one, so yep~
Woavvoofs are anthropomorphic semi-aquatic creatures who owns a big lore on which I've worked a lot and still work on as a personal hobby. However, I don't share the full details about them online for my own comfort, only small infos can be seen here and there, but this all.

Ralok very likes bellyrubs~
Give him nice pats pats and he would like you forever and might not bite much.
Show that you care and he would care as much back! ♥

He is a seafoods lover and like to simply relax on beaches or underwater when savouring some fishies skins.
Hunting and fishing are his favorites hobbies, obviously.
But, he is kinda shy and reserved, so he would prefer to stay away from any towns and cities, he dislike the ruckus that can be heard into these and it is far from pleasing his mind unfortunately.
Ralok just wish for a quiet and easy life, but he is far from getting it actually.

Also, he is pretty "wild", preferring to live among nature to smell the fresh air of open spaces and to breath the sea breeze while hearing the waves noises touching the warm sand. His "kind" mostly lives into caves, so it is not rare either to see him more active at night time.

In short, Ralok is very gentle and kind hearted. He would never impose himself to others even if considering his massive shape, but his loyalty might be abused by malicious people. He try to not be gullible, though his guards can't push everything away sadly.
With strangers he would be harsh at first, but let him feel comfortable enough and you would be able to see him acting with comfort at your sides.

About his Sharky Hat, no need to know anything else than this; it is a grumpy annoying talkative living carpet which can affect Ralok's personality greatly. Whatever this one can say is only garbages and insults. As advice, never take the Hat seriously.
Ralok and him have theirs minds linked together forever. Things are this way because Ralok comes from a special bloodline in which you need to follow specific rules, honor and God's wills.
Short explanations, this is genetic traditions from his specie exclusively.

How to know if the Shark have control on Ralok's mind? Ralok's scleras would turn black and his attitude would change from passive to evil, savage and aggressive. Try to avoid him in this case or throw away some fishies, you might be lucky enough to make him chase these instead.

However, Sharkboy isn't pleased at all about this concept and if he was able to, he would gladly get rid of this stupid mind parasite any time.

Traits: Kind, gentle and loyal. He is honest and modest. Faithful and Generous.
Ralok do his best to get things good and would take any hits for the ones he cares for. He is attentive with his relatives and close friends. Have a big heart and can demonstrate good senses and manners. He is easy to live with when he have full trust in you. Even if pretty lazy by nature, when he wants things to be done, he would put his 100% into it, no worries.
If he judge something unfair in any ways, he would perform his best to change it at any costs.

Flaws: Might show irritability around pompous and snob figures. In these cases, he is quick to anger. He dislikes the ones which think have any kind of powers on others, so people from royalty or any high status are the ones he would the most avoid(or even try to kill if too much destabilizing). He as well not like being around overbearing personages or males in general, flaws attitudes which are courtesy from the effects of his tribe's environment and father's actions towards him.
He also have a disturbing possessive side by time, but usually, he is not being a big deal about it.
~~~~~~~~~~~~~~~~~~~~~~~~~~~~~~~~~~~~~
-Quick further details.
°Have a possessive side.
°Blood can drive him crazy and forget his surrondings, even who are his friends.
°He hate his father with no end, but he is not going to give his paternal the pleasure to know that.
°He can't be around childs or pets, he consider them as preys because of their small sizes.
°He appreciate the presence of gentle females over any others kind of people.
°He like bellyrubs~
°He like being pet and scratched.
°He can abuse of his 'puppy eyes' effect.
°His sense of smell is very developped, meaning that he follow this sense over any others.
°Any 'fishie' scents drive him crazy, his specie have a taste for mermaids and see their meat as a luxe/exotic meal.
°He can seem dumb, but this is only because he don't care.
°He prefer to lick and bite better than kissing.
°Going to add more later...
//Note to self - Need to keep 'short' texts. T":
Any others informations about my OCs are kept private for personal reasons.

Paintie made by Me
All arts ©Mayasacha
ALSO GUYS, THANKS FOR YOUR COMMENTS! THESE ARE MAKING MY DAY AND ARE SO MUCH WARMING MY HEART! ;w;