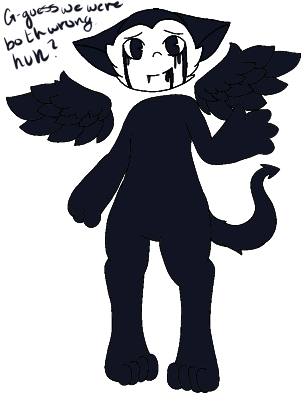 "After what might as well be about a million years of floating around the WWW, you'd think we'd get used to it. But, guess we were both wrong, huh?"

Trakky is a canine-like species with no set design or background. It can change periodically, though stays in the same general color scheme and shape. She is outgoing and cheerful, and is expecting another design change in the future. She is a character that is also a fourth wall breaker, constantly making remarks at her creator to hurry up with design changes or any other project they are working on.

Within the "WWW", Trakky rarely talks about reality, mainly sticking to certain characters for a while, only to vanish for long hiatuses while she takes a liking to others elsewhere. She goes where she wants, when she wants, unless she is currently in the middle of a roleplay started by her creator. In a sense, you could say they are the same person, with Trakky being their fursona. This is easily the reason for so many design changes, as Trakky is still in development.

Her development often times revolves around the state of being out of the WWW, such as needed design changes for general plans, or a general disliking to an idea that was good at the time. Either way, it may be a while before designs are finally set.

Trakky often times gets upset with her creator due to the fact that the words of those around her aren't quite true, only interpretations made by the creator. However, this is only minor, and Trakky is allowed to comment on things, since they have the same personality and mindset, and her creator knows exactly what Trakky would say in any given situation, evening out any mishaps in ideas.

"And speaking of which, I'd just like to thank everyone who has given me support, where it be through Commisions, Help in general, or just a simple like. Whatever it is you do, thank you!"