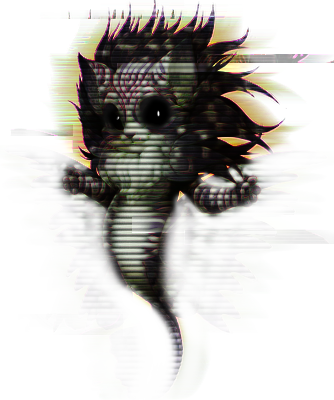 Lucky is infected with Zombipathy. Eating brains relieves symptoms for a time, but comes with memories of the brain's former life. Your doctor recommends adding hot sauce for extra flavor, but a Golden Apple a day will send the Zombipathy away.

~A small wisp of a creature most often associated as a cat.~

Lucky is unsure of his species, or even his gender. But wanting to fit in with the other villagers he chose to tell he's a male cat that used to live in the forests before his family brought him home. When pressed for more information on his past he becomes defensive, claiming that he knows nothing. Lucky's personality is most similar to a hyper child that had too many cappuccinos and than one more.
He floats through the air and circles villagers he wishes to talk too, usually saying his thoughts on their appearance.
He is much smaller than most of the family, comparable to a small mouse.