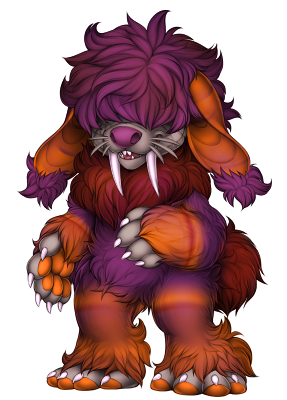 Found wandering around the woods by Bat Outta Heck, Snuffleupagus (or Snuffy) was brought in by clan of which Cat Bountry leads. Nobody was quite sure if Snuffy was a boy or a girl or a whatever, and Cat named him after Big Bird's best friend from Sesame Street, as Snuffy reminded her of the big, hairy elephant. By default, most of the villagers call Snuffy a "he," despite not exactly being sure about his gender, but Snuffy doesn't seem to mind either way.

Snuffy doesn't speak, but instead communicates in a variety of grunts, growls, howls and barks, as well as crude pantomime, but he appears to understand the speech of the other villagers just fine. He gets along quite well with Blinky, who also doesn't speak, and is best friends with Soopah Beesstoh. Snuffy is a gentle giant, and is quite interested in cooking. Snuffy just wants to be your friend.