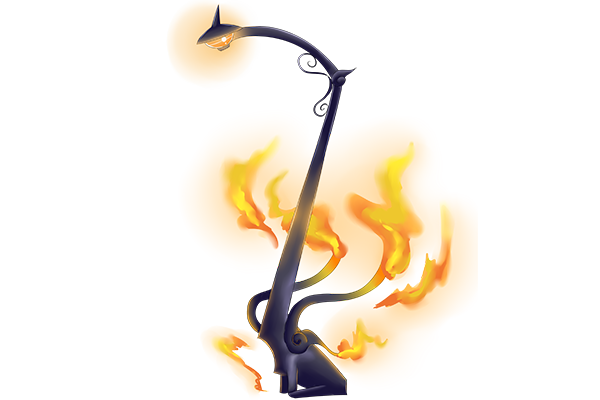 STREETLIGHT WITH LEGS!!!!!! MONOL IS RUNNING OUT OF IDEAS GEN ONE WAS THE BEST GEN FUK YOU MONOL!!!!!! THIS IS UNCREATIVE JUST LIKE U, U FUCKIN BLACK FLOATING WALL

Gilmarie sure is something. She's definitely fucking something.

Whatever the heck this thing is, it's by far stranger than Regal and literally has no reason for being a legal citizen of Quetzal Palace. Even REGAL is confused at Gilmarie's existence.

"Gilmarie" was the name given to the creature by whatever batshit insane sorcerer that decided to literally chuck some life-giving magic at a STREET LIGHT and expect everything to go okay.

As a result, the pole of concrete and wiring gained the will to live, the artificial musculature of some sort of long-necked animal, and also some really short, really ineffective legs. She tends to wobble when she walks, and has more than often smashed right into the roof of multiple villagers; especially Guzma for some reason.

Auriane once woke up with her face almost an inch away from where she was sleeping, since she had crashed head-first into Auriane's window and got lodged there the entire night. This also goes to show that not only is Gilmarie clumsy as all hell, but Auriane somehow is able to sleep through ANYTHING, including an eye-burningly bright light in her face all night.

When she falls down, it's a struggle of life and death for her to get up and most people just laugh at her desperate attempts to right herself--poorly-jointed legs flailing pathetically.

Gilmarie can't speak, unlike Regal who actually can and is just a big fat dirty fucking liar. She does hold some intelligence though, she knows to attend public presentations by Quetzal Palace's mayor Ana, but literally everyone in the crowd (who are mostly various animals) get extremely uncomfortable sitting next to a 20 foot tall sentient street lamp with fire coming out of its back and ridiculously stumpy legs.

When she isn't stumbling around at night like an idiot (she's nocturnal), her favorite thing to do is eat moths. She eats moths. NOT AURIANE, the little tiny moths that buzz around her face. Her life is so interesting and everyone should be friends with her.

Some villagers of QP have started Gilmarie-based warfare against the other villagers that they hate. They purposefully set up tripwires near their enemies' houses, so when Gilmarie walks through there at night she trips and smashes into said houses.